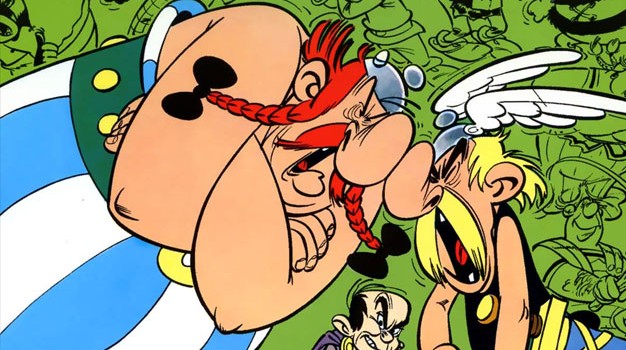 I remember Asterix and the Roman Agent with a hint of fear in my younger self. It sported a sickeningly green cover and showed a great many Gauls and Roman soldiers shouting at one another, with Asterix and Obelix right in the centre, their inflatable-looking noses pressed up against each other looking fit to burst. Dogmatix cowers next to Obelix, not really knowing what’s going on but not liking it one bit.

As a youngster reading these comics, I remember feeling a lot like how Dogmatix looks. The comic centres on the Gauls, who are all as friendly with each other as you can imagine (just look at page one, a half-page spread dedicated to how chummy they are with each other), having to deal with a Roam spy being sent into their village in order to bring it down from the inside. The spy, Tortuous Convolvulus, does so by spreading rumours, boiling up the worst in everyone, and have the village’s residents turn on each other.

He succeeds to great effect, but Asterix and Obelix, who are only momentarily affected by the spy’s powers, vow to punish the agent when his talent for spreading rumours makes the Romans believe they have the secret recipe for the magic potion!

A clever element regarding The Roman Agent is how it brings out the worst traits in the otherwise goofily adorable Gauls. Sure, previous volumes had both hinted and shown just how unpleasant they could be, in a comical way, but in The Roman Agent, the sourness in each character affected by the spy feels genuinely mean-spirited. But of course, this being an Asterix title, comedy always prevails. The climax builds up to one of the grandest punch-ups between the Gauls and Roman reinforcements in the entire Asterix saga – there’s even a full-page spread entitled ‘The Battle of the Village’ that helpfully maps out who’s attacking who and where.

Asterix and the Roman Agent is definitely one of the strongest titles in the series, but whether that means it’s a contender for ‘the best’ is debatable. As mentioned, the book displays the full arrogance of the Gauls and how easily they can be manipulated. Even the epilogue of the spy’s inevitable defeat shows that the Gauls, with or without being poked and prodded, are all too susceptible to jealousy and slander against one another.

That negativity reigns supreme throughout the book, but with its deeply-layered finale and overall plot, Asterix and the Roman Agent is certainly a contender for the most spirited of the novels.