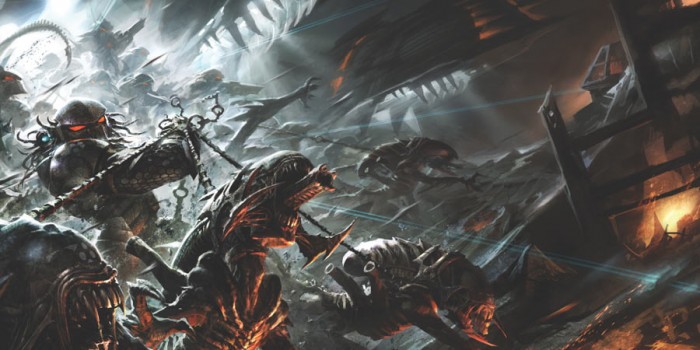 Anyone who got into comics during the early nineties will likely have fond memories of Dark Horse’s numerous movie tie-ins, the most successful of which by far was Aliens vs. Predator and its thousand or so predecessors. Well, having recently resurrected the Alien and Predator series individually, Dark Horse is once more pitting those popular extra-terrestrials against each other.

New readers may find ‘Three World War’ (quite possibly the worst title ever) a little confusing, as it features Machiko Noguchi, the protagonist of the original AvP miniseries and the AvP: War sequel, which are both still superior examples of franchise crossovers. After a human mining colony is wiped out by a group of Predator’s manipulating leashed Xenomorphs, Machiko, who now runs a big game hunting venture, is enlisted by the Colonial Marines. It turns out that these Predators are not the usual ‘hunters’ we’ve seen in the past, but ‘killers’, a renegade clan long though dead. Whereas most Predators will only attack worthy adversaries, these pariahs are totally indiscriminate in who/what they kill.

While Three World War is looking to be yet another mediocre entry in the Aliens vs. Predator series, less particular readers will still find enough to enjoy. Stradley confidently lays out the basic premise, as well as briefly recapping Machiko’s back-story, while artist Rick Leonardi handles both the dynamic violence and dialogue driven moments with considerable flair.

So… Alien vs. Predator: Three World War, is a competently told tale that is entertaining if neither original nor memorable. Were you honestly expecting anything more?