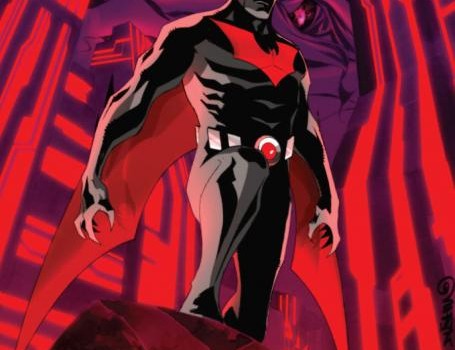 From the first page of ‘Hush Beyond,’ the comic revival of the futuristic Timm/Dini take on Batman, it’s clear that this ain’t your daddy’s/younger self’s Batman Beyond. Kicking off with the aftermath of an inmate escape from Cadmus Labs and the bodies of several butchered security guards, this is a darker take on the Terry McGinnis Batman, and is aimed at an older audience than the original animated series. This more explicit take on Batman Beyond leaves me somewhat torn. On the one hand, it’s nice to see DC catering to fans of the series, who have presumably aged since the show first aired, and without resorting to the sort of generic cash-in titles that have accompanied each major Warner Bros superhero cartoon since Batman: TAS (though some of those efforts were actually pretty solid). On the other hand, ‘Hush Beyond’ feels tonally conflicted. The colourful goons and Wayne’s hyper-intelligent dog are still present, yet we have the “return” of a villain entirely new to the animated universe (the clue is in the miniseries’ title), sadistically carving up numerous innocents. Imagine if the costumed cretin-of-the-week pursuing Scooby-Doo and Shaggy caught up with them and stabbed Shaggy’s eyes out with a rusty screwdriver. It’d certainly be entertaining, but it wouldn’t quite be Scooby-Doo.

Likewise, Ryan Benjamin’s art straddles the look of the animated series and something more “mature,” but the art pretty much holds the book together. John Stanisci’s inks and David Baron’s colours bring out the best in Beyond’s striking character designs, and together they’ve provided something far more interesting than the simple mimicry of Bruce Timm’s minimalist style.

I’ve yet to discuss the plot in any detail. This issue doesn’t really warrant one, but here it is anyway: a killer is on the loose, McGinnis and Wayne have an argument, Batman beats up Spellbinder and turns down an offer from the Justice League… and that’s about it. Yet Adam Beechen does a decent job of juggling the old with the new, while establishing the relationship between Wayne and McGinnis for newcomers, and it’s easy to forget that, bar a cameo in Superman/Batman, this is the first chance we’ve had to visit Neo-Gotham in almost a decade.

The worst criticism that can be thrown at ‘Hush Beyond’ is that it’s as conventional a spin-off as you could possibly find – and that’s taking the violence into account – but I wouldn’t say that’s necessarily a bad thing. The fans wanted to see the Batman of the Future return, and Beechen and company have delivered it with aplomb.