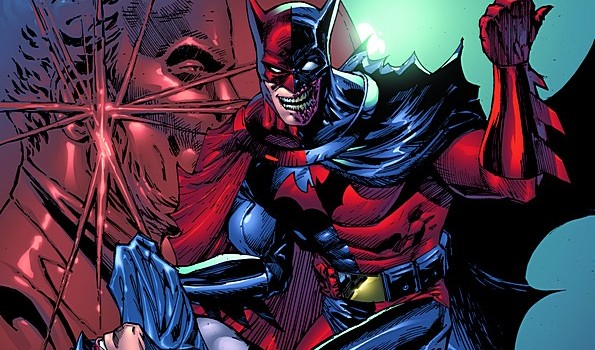 As the ‘Long Shadows’ arc thankfully reaches its conclusion, I think it’s fair to say that Judd Winick’s run on Batman hasn’t gone down too well with readers or reviewers. While I’ve enjoyed Winick’s quieter moments between Dick and Alfred, I think it’s been evident that he either doesn’t quite understand the Dark Knight. Or, more specifically, he doesn’t appreciate what fans expect from this series.

Many readers appear to object to Two-Face’s use of a teleporter to gain access to the Batcave, but this didn’t’ bother me in the slightest. In a title that has recently featured Clayface slinging chunks of himself at a flying Batmobile, the notion of another super-powered being in Gotham is hardly stretching believability. For me the problem with this arc is that Winick fails to deliver on any of the early potential the series’ part in Batman Reborn promised. The clownish Two-Face Bat-costume transpires to be nothing more than a hallucination, while Alfred’s ploy to convince Dent that Grayson is the genuine article is hackneyed beyond belief. Even more disappointingly is the intended big reveal of the villain who has been playing Penguin and Two-Face against one another. Y’know, the character shrouded in shadow, who looks just like Black Mask? Shockingly, that sinister silhouette turns out to be Black Mask.

And that’s the real creative transgression here. It’s one thing for a writer to struggle in wrapping up a plot arc, another for said writer to simply assume that his readers are idiots who care as little for character consistency as he apparently does.

Winick’s hollow plot “twists” aside, this storyline has at least set up Dick Grayson as a more cautious Batman; he still has a lot to learn, and I hope that Wayne doesn’t return before he gets a chance to. Mark Bagley’s art is always proficient, and this issue’s final moment in which Dick discovers a hidden data key in the Batcave, one which suggests Bruce was hiding something from him about the death of his parents, is indeed tantalising. Hopefully Tony Daniel will do something reasonably intelligent with this development when he takes the reins next month.