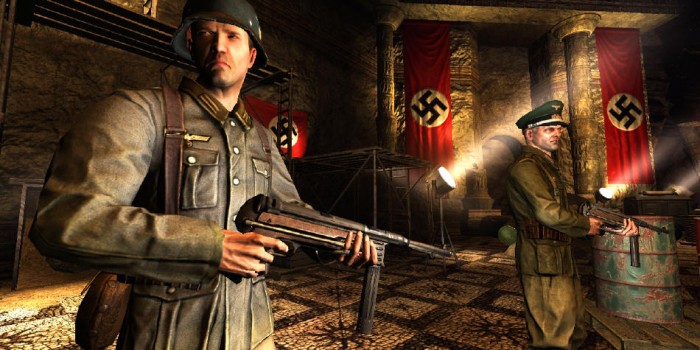 Wolfenstein is not without its flaws, but its combination of Nazis and the occult never grows old.

Nazis, Nazis, Nazis. Long before Indiana Jones was dragging them from trucks and propelling them into propeller blades, the Nazis have provided an almost inexhaustible number of disposable bad guys. No matter how many Swastika waving scoundrels get killed in movies or games, it’s genuinely difficult to care. Fiction tends to forget that many German soldiers were also just scared kids with no other option; instead, recent history’s greatest villains are simply cannon fodder deserving a bullet in the head. This attitude perhaps explains why I’ve always had a problem with World War II videogames; the immediate descendents of the people involved still exist.

To its favour, Wolfenstein, the first instalment in ID Software’s seminal FPS series in six years, messes with history to such ludicrous extremes that’s its difficult to take seriously in any way whatsoever. Previous Wolfenstein games have always began comparatively realistic, and leant deeper towards science fiction as the story progressed. Wolfenstein 2009 doesn’t even wait for the intro cinematic to finish before descending into a mishmash of sci-fi, fantasy and war movie elements. And it’s all the better for it. Raven, the developer behind the brilliant Star Trek: Voyager FPS Elite Force and 2005’s unjustly scrutinised Quake 4, have provided a textbook example of how to update a classic but abandoned franchise with whatever conventions are currently popular. Want time manipulation in your WWII? You got it. RPG elements? Why not. But while this approach makes Wolfenstein an interesting addition to the series, it also stops the game from providing anything that a more focussed contender doesn’t do better.

Push the derivativeness aside, however, and Wolfenstein’s single player campaign is immensely entertaining. The plot, which sees regular G.I. Joe Agent B.J Blazkowicz at his Nazi bashing best, is intriguing enough that you’ll overlook any number of flaws. Much of the game is set in the fictional German town of Isenstadt, in which Blazkowicz will aid three rebel faction overthrow the Nazi forces that are literally tearing the place apart. Isenstadt serves as a hub from which other mission maps are activated, as well as a home for the Black Market, an underground faction that will upgrade Blazkowicz’s weapons and powers in exchange for the gold he loots on his journeys.

B.J. Blazkowicz is a generic hero only remarkable for his absurd name, and while Wolfenstein 2009 lends him a bit more personality than in previous games, he’s no Nathan Drake. Equally, the campaign’s cutscenes are as uncharismatic as their protagonist, with none of the rebel aids proving in any way remarkable. But its Wolfenstein’s enemies and sci-fi weaponry that will keep you playing; from the moment you add the incredible particle cannon to a previously conventional arsenal, the game continuously surprises you with increasingly preposterous situations. Likewise, the enemies become progressively fantastic; whereas Return to Castle Wolfenstein played with genetically engineered monsters, this game’s enemies tend to either resemble steam punk incarnations of Iron Man or mystical teleporters. The chaingun-wielding Hans Grosse also makes an unwelcome return. Alongside the ingenious firearms, Blazkowicz has the Thule Medallion at his disposal. Activating this magical relic grants him such abilities as the time-halting Mire, bullet-reflecting Shield and Veil Sight; with which B.J. can see into the Black Sun dimension, which holds the usual unimaginable power the Nazis are always so determined to meddle with. Inside the Veil bizarre energy creatures called Geists become apparent – many of these are passive, but in later levels prove as much a threat as the German super-soldiers.

The Thule Medallion is a nice idea, but as with other first-person shooters that have implemented such powers, it tends to make many battles far too easy. Energy supply points are so liberally dotted about most maps that it’s tempting to play through the majority of firefights with the slow-mo Mire ability enabled, fleeing to a nearby energy spot to charge up and heal when things get out of hand. The Isenstadt hub also feels like a misinterpretation; it’s as though Raven were adamant that the game follow a less linear structure, but weren’t quite sure why.

Given how inventive Wolfenstein: Enemy Territory’s multiplayer offering was, it’s disappointing to see that Wolfenstein 2009’s online mode isn’t anything quite as remarkable. Whereas the campaign gets by on its creative enemies and B-movie charm, the three multiplayer modes (Team Deathmatch, Objective, Stopwatch) and trio of character classes (Soldier, Medic, Engineer) pale in comparison to Call of Duty. Wolfenstein’s visuals dance wildly along the line of mediocrity as much as any other part of it. The Veil ability often causes the frame rate to stutter, and some of the physics effects often behave unusually, but overall it’s a competent looking game that houses some excellent villain designs. Unfortunately this creativity didn’t extend to B.J. or the inhabitants of Isenstadt, who are as bland an assortment of stereotypes as you are likely to find in a FPS.

Special mention must go to Wolfenstien’s sound effects, many of which are appropriately out of this world. From the basic MP40 to the futuristic particle cannon (think Ghostbusters) and Tesla gun, every shot and explosion sounds utterly satisfying. The music and is also excellent throughout, even if it does shamelessly infringe on the eeriest moments of John Williams’ score for Raiders of the Lost Ark; but given Wolfenstein’s blend of Nazis and the occult, that’s not entirely a bad thing.

I enjoyed Wolfenstein’s single player campaign far more than I was expecting. Sure, it’s completely derivative, and the Thule Medallion abilities often take away as much from the game as they provide, but Raven and ID Software have created a fascinating universe that is more than a sum of its many, many influences. The multiplayer is a missed opportunity, but if you’ve ever wished to participate in a cornball blockbuster battling magically augmented super-Nazis, then the solo component of Wolfenstein is entertaining enough to stand on its own.