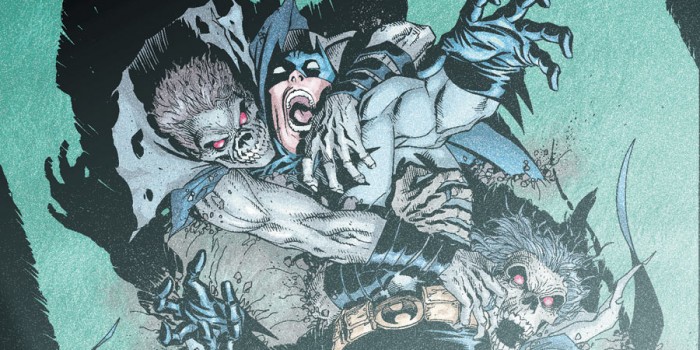 Of all the Blackest Night spin-offs, Batman’s was never going to be the most significant, but it had the potential to be the most personal. While everyone involved in the big event has lost someone, the murder of Dick Grayson’s parents is what drove him to become the Boy Wonder.

On this vein: I’ve been a fan of Grayon’s Batman, but I can’t help but feel that this miniseries would have worked so much better with Bruce Wayne. Whereas Wayne was forever tormented by the death of his parents, Grayson has always seemed a far more adjusted individual; which perhaps explains why Peter J. Tomasi doesn’t really know where this cosmic digression is going. I’ve been a big fan of Tomasi’s work on Green Lantern Corps, and for the first two issues of this mini he kept the pace equally relentless, only to now stumble at the finish line as Dick and Tim Drake/Red Robin – whose father was murdered by Captain Boomerang in Identity Crisis – face their greatest fear. The inclusion of Etrigan is pointless, and the way in which Dick and Tim overcome their adversaries is the stuff of Saturday morning cartoons.

Ultimately, Blackest Night: Batman is a superfluous part of what is really an epic Green Lantern conflict that DC have chosen to branch out. But overall it was a fun enough ride, and seeing the rotting corpses of Arnold Wesker, Blockbuster and KGBeast return to antagonise the new Batman was always going to be engaging.