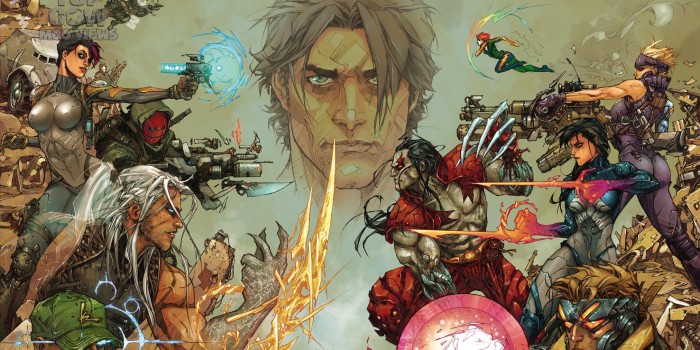 To appease my sado-masochistic tendencies, I’ve got into the habit of forcing myself to review at least one comic per week that I wouldn’t buy otherwise. This week I gravitated to Cyber Force/Hunter Killer in an effort to cleanse my mind of the original Image series, which was just one of many multi-volume punch-a-thons that helped put me off of comics for several years. Perhaps it was the cover that swayed my decision, or the fact that new series is written by the venerable Mark Waid; which is never a bad thing, really. Fortunately, Cyber Force/Hunter-Killer #1 was a decent, if unspectacular, read. Waid (Irredeemable) does a great job of introducing both sets of tech-dependent characters in the first issue of this five-part miniseries via a brief interrogation, within which we receive the history of the Hunter-Killers neatly crammed into two pages. As someone who only vaguely remembers Cyber Force and never read Hunter-Killer, not once did I feel that I was being thrown into this world unprepared.

Nevertheless, the highlight of this series has to be Kenneth Rocafort’s (Astonishing Tales) vivacious art. His pages have a superb flow to them, and his illustrations themselves have a loose, pencil-sketch energy to them that still evokes that glossy pin-up poster art Top Cow have always been known for. Expect to see this guy in very high demand very soon. If he isn’t already. There’s a cringe-worthy letter at the rear of this issue from the publisher, which proudly drums this series as “more than a crossover,” and continues to tell us that the plot for Cyber Force/Hunter-Killer is rife with meaning and relevant allegory. This is rubbish, of course; this series is sci-fi folly in which two teams of cybernetically enhanced superhumans inventively batter each other (only to later cooperate) with several conspiracy theories acting as background plots. But Waid and Rocafort deliver the entire package with such measured panache that it shouldn’t have to be publicised as anything more.