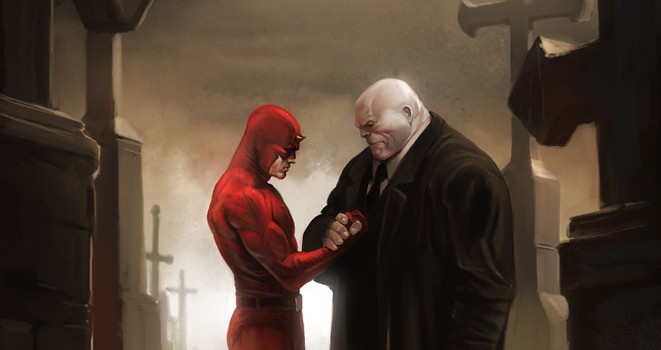 One of the problems superhero comics have in maintaining long-term reader interest is that nothing really changes. Just as we know that Bruce Wayne will eventually reprise the role of Batman and Spider-man will one day reunite with Mary Jane, it’s hardly surprising that Wilson Fisk, the Kingpin of Crime, has returned to Hell’s Kitchen. Yet in Ed Brubaker’s capable hands this is no standard comeback. Throughout his run on the series Daredevil’s relationship with Fisk has been so finely tuned that it is now one of mutual respect and shared sorrow rather than needless antagonism. They’ve been through so much together that they need one another – and while that may sound more than a little cheesy, Brubaker and Brian Bendis before him have thrown so much at these two over the last decade that the big man’s homecoming has the sort of genuine gravitas other titles can only aspire to. Marko Djurdjevic’s wonderfully deep cover alone speaks more than any width of contents possibly could.

Part 1 of ‘Return to the King’ focussed entirely on Wilson Fisk and his time in Spain. It was marvellously written tragedy, which may have served the principle purpose of bringing Fisk back, but it also gives us his character from an entirely new perspective. As Fisk reasserts himself amongst the Hell’s Kitchen underground, no longer intent on power but on avenging the murder of his brief family by Lady Bullseye, it’s not quite clear how his relationship with Matt Murdock will now develop.

In any other series, the Lady Bullseye story arc would have been excellent. Compared to Brubaker’s previous plots, it was merely good – such is the height at which he has set the bar for the man without fear. Her Ladyship and The Hand’s presence continue to overshadow events here, and though I’ve never enjoyed the ninja elements of Daredevil as much as his affairs with New York’s more credible riff-raff, it’s pretty exhilarating to see the Mystic East and organised crime slowly approaching a head-on collision.

The legal case subplot involving Murdock’s currently catatonic wife Milla and her parents is at present slowing the plot down a fair bit, but given Brubaker’s history on this series and Captain America, these events will likely have far grander repercussions. What those might be is, as ever, anyone’s guess.