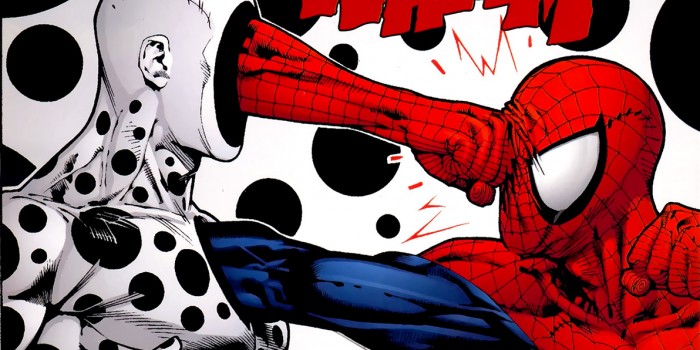 With Brand New Day and Character Assassination out of the way, the now thrice-monthly Spider-man is back to battling goofball villains of the week, each more embarrassing than the next. The Spot, a ridiculous looking adversary who resembles a human Dalmatian – though to Van Lente’s credit he has Spidey quip the same – is up for a thumping this time, with the webslinger all that stands between him the assassination of tired Russian Mafia cliché Dmitri Ivankov. The Spot actually proved to be quite an interesting foil, and his inefficiency in communicating his surprisingly sympathetic motives to Parker was hilarious. With a slight costume redesign, the character would make great addition to a team like the Great Lake Avengers – and I mean that in the nicest way possible.

I’ve only stepped in and out of Spider-man since the Back in Black story arc, and the mock Daily Bugle news page at the front of this book served as an excellent update. It’s great to see Marvel approaching their titles with such accessibility in mind, even if that same mentality has hindered storytelling potential so often in the past, and led to unnecessary reboots such as the one this title has recently undergone. Fred Van Lente packs a lot of plot into just twenty-or-so pages, and Paulo Siqueira’s dynamic art is very appealing, even if his bug-eyed rendition of Spider-man looks like it was ripped straight from the early nineties MacFarlane era. Spidey’s casual Christian Bale impressions were also pretty funny, especially as the Bale role was a certain lunatic in a bat costume. The idea that DC Comics and its related media incarnations exist in the Marvel Universe is actually pretty mind-bending when you actually think about it. So I’d advise you don’t.

It goes without saying that ‘Marked’ isn’t a life defining read, but it was never intended as one. As far as standalone stories concerning a comic icon who over the past forty years has been put through every conceivable scenario a hundred times over, it proved a pretty enjoyable read. Peter Parker is a lot more fun when people around him aren’t dying.