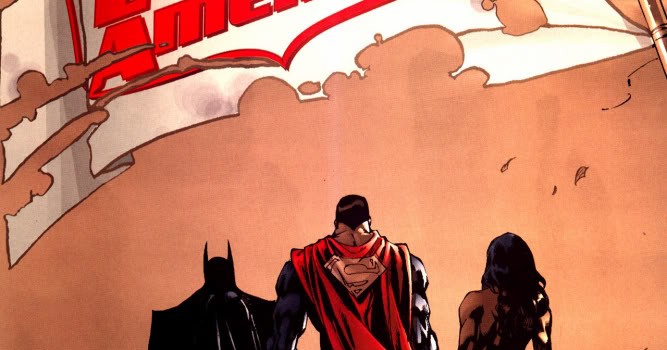 More than any other superhero group, the Justice League of America has always lacked a plausible reason for its continuing existence. The Justice Society is a family of crimefighters old and new, while the X-Men banded together as fellow outcasts. Even the members of Keith Giffen’s Justice League International had sufficient motivation to stick together, in that by their own they were mostly ineffective B-list losers.

The Justice league of America just is. Superman, Green Lantern, Green Arrow, Wonder Woman, the Flash… none of these major league players need to join forces bar the occasional world threat, and having them unite on a monthly basis always feels forced. In a neat reverse of the “team recruitment issue” template initiated by Claremont in Giant Size X-men #1 and imitated countless times since, Dwayne McDuffie essentially has each of the founding members take turns to observe the same. If McDuffie’s approach to JLA decimation should be commend for anything, it’s his decision for the team to go out with a whimper rather than a bang. In the aftermath of Final Crisis, which saw the demise of Martian Manhunter J’ohn J’onzz, as well as the recent “death” of Batman, the team is in desperate need of a shake up. Superman is returning to New Krypton, Diana will be concentrating her efforts on Themyscira, and Green Lantern and Green Arrow are to resume their seminal seventies double act in the Justice League: A Cry for Justice  mini-series.

McDuffie always balances the team banter well, and while the art by Davis and company may be a little generic and indistinguishable for my tastes, it suits a book like this fine. Despite Black Canary’s announcement at the end of this issue, this isn’t the end of the Justice League – the advert for Issue 32 is a bit of a giveaway – but a justification for a new one. The following months may not see a “better” Justice League of America, but they’ll hopefully see a more interesting roster.

With this issue treated as an interlude to the forthcoming ‘Crisis of Confidence,’ which is really one crisis too many, it’s also actually a pretty good starting point for those wishing to get into the series. Though those newcomers could just as easily save their cash and jump aboard next month.