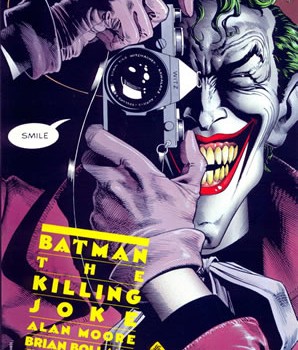 If there’s a trend in any critic’s list of acclaimed graphic novels it seems to be that the most lauded comics are usually multi-volume efforts, or extensive, dense affairs. At a mere 48 pages The Killing Joke is not as intricate or layered as Alan Moore’s other works, but the book’s achievement is not in the short but masterfully executed story it tells but the way in which it redefines the relationship between two age old icons. Often placed alongside Frank Miller’s bookends Batman: Year One and The Dark Knight Returns as the holy trinity of essential Batman reads, The Killing Joke doesn’t really bear comparison with either. Whereas Miller looked at Batman as a media figure and questioned the effects that such an entity would have on the city he’d sworn to protect, Moore looks beneath his eternal dualists, viewed askew as a conflict of two insane wills. For a book which deals with identity, it’s interesting that Batman is never seen out of costume; indeed he is only shown unmasked on one page.

For those who seek chronological significance, The Killing Joke is also the tale in which ex-Batgirl Barbara Gorden is shot through the spine by Joker and permanently crippled. It’s a depraved scene, but as with much of Moore’s depicted violence it serves a purpose, showing us the maniacal clown delivering his most heinous crimes while a series tragic flashbacks work at humanising him.

The Deluxe Edition of Killing Joke has been completely re-coloured, with John Higgin’s neon airbrush palette replaced by illustrator Brian Bolland’s more subdued colours. The result is nothing short of fantastic, though it’s a shame that the book doesn’t provide a few before-after page comparisons. Bolland’s fine illustrations haven’t aged a bit, and while the amendment of a classic is ethically debatable, part of me salivates at the notion of a retouched Watchmen. Also included is the Bolland oddity ‘An Innocent Guy’, originally published in Batman: Black & White, in which an everyday bod fantasises about offing the caped crusader.

Whether the Joker’s origin told here is authentic has been open to much debate. “If I’m going to have a past, I prefer it to be multiple choice!” he tells Batman. With a touchingly enigmatic final scene that has raised more reflection than it’s ever really warranted, The Killing Joke asks more questions than we should want answered. It’s the definitive Joker story; anarchic, depraved and unfathomable.