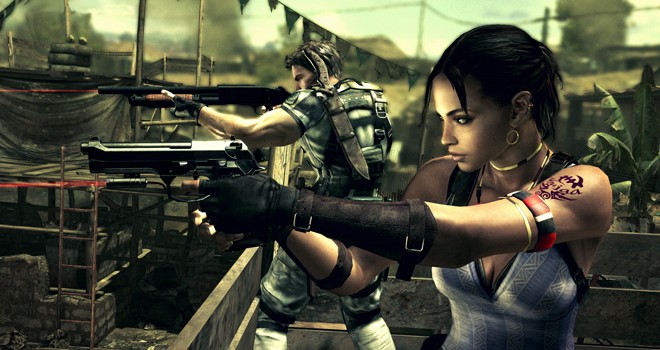 Resident Evil 5 sees series stalwart Chris Redfield take on his most formidable adversary yet, an old nemesis that will have gamers emitting blood-curdling screams and dropping their controllers in terror. An infuriating, awkward beast that makes venomous villagers and chainsaw wielding nutjobs seem like a walk in the park. But once you can get over Resident Evil 5’s antiquated tank controls and give the latest in Capcom’s flagship zombie series just two hours of your time, you’ll likely forgive Capcom’s aversion to change. Several archaic game mechanics aside, Resident Evil 5 is a class act through and through. Swapping the series’ familiar static camera for an over the shoulder perspective, Resident Evil 4 was arguably the best action game of its generation, a non-stop romp of action movie centrepieces that gave gamers an experience twice as long as they probably deserved. Slightly shorter but just as memorable, Chris Redfield’s latest stops short of topping its precursor, but second helpings of one of the greatest games is hardly something that should be scoffed at for the sake of analysis. From the initial flight through the fictional shanty town region of Kijuju and Indiana Jones inspired crypt sequences to the excessive bullet-time cutscenes, Resident Evil 5 oozes quality as consistently as it vents crimson fluids.

Gamers unaccustomed to the series may find its idiosyncrasies unintuitive and alienating. Which they are. While the series has always used its protagonist’s physical limitations to enhance the survival horror experience, there’s no denying that after Dead Space, Chris’s clunky, mechanical controls feel like a step backwards. The co-operative elements aside it can hardly be considered an evolution of the franchise, unless you consider Redfield’s newfound ability to sidestep a development. Like a schlocky B-movie, Resident Evil 5’s plot is equal parts exhilarating and embarrassing, the sort of explosive, consciously stupid game Michael Bay would make given the opportunity. Several years after witnessing the death of Jill Valentine at the hands of Albert Wesker, Redfield, now a BSAA (Bioterrorism Security Assessment Alliance) agent, is deployed to Kijuju, Africa, to apprehend black market virus dealer Ricardo Irving. Needless to say, another outbreak swiftly ensues. Without delving too deeply into the spoiler-sensitive story, it must be said that RE5 is also pretty conclusive, with many of the loose ends from the previous game and Code: Veronica – primarily Wesker’s newly acquired superhuman abilities– coming to a finale.

Chris isn’t going against the hordes of Las Plagas (now called Majini) alone this time, teaming with fellow BSAA member Sheva Alomar. Sheva is far more than a pretty face or an ammo mule (unless you want her to be) and many scenes require co-operation, whether with a friend or the adequate AI. Co-op is also available offline, and though the split-screen mode can prove a little cramped it’s a nice touch. Lonely, friendless gamers can rest assured that, bar the occasional senseless act, like committing suicide by eating a rotten egg or wasting your precious magnum ammo, Sheva’s a pretty formidable ally. The game’s real-time inventory system may also feel like an inadequacy when struggling through the trickier moments in single player, but it arguably enhances the gameplay, persuading players  to stay equipped, organised and reloaded at all times. Whereas Resident Evil 4 had the H.P. Lovecraft ambience to carry it, this African excursion suffers from a distinct lack of genuine scares. Having a buddy watch your back really does detract from the sense of isolation that made the first three entries in the series so tense. You’re still outnumbered, but the game never reaches the levels of escalating futility that Gear of War 2’s Horde mode could. Similarly, the bleached, arid vistas may have seemed an inspired choice during conception, but the presence of daylight detracts from any sense of unseen menace. That sense of claustrophobia the mansion-located original revelled in dissipates instantly when you find yourself taking time out to enjoy the sun setting over the desert horizon.

Completing the game opens up an option to play the single player game from Sheva’s perspective, with several inconsequential moments now viewed from her perspective, and also unlocks the Mercenaries mode. A feature that has been present ever since the Dreamcast version of Resident Evil 2, Mercenaries pits you against a relentless supply of Majini’s and a ticking clock, as you strive to gain points through kill combos. It’s a great addition that prolongs the game substantially but, like much of Resident Evil 5, is far too easy when played with another able participant in co-op.

Each weapon in Chris and Sheva’s vast arsenal has its uses, though special mention should go out to the riotous stun rod, an electric cattle prod in all but name. Powering several weapons up to the max unlocks such beauties as the requisite gatling gun, a bow and arrow for Sheva, and the Hydra, a triple-barrelled shotgun as devastating as it is erroneously dubbed. You won’t level any weapons up in just one playthrough though, but all money and exchange points you do acquire will roll over to subsequent plays. As does ammo, though this can make multiple replays significantly easier even on harder difficulties.

The Mercenaries Mode, combined with numerous other unlockables such as costumes, filters and a fun gallery of virtual gashapon models, RE5 gives you an awful lot to come back to. I can’t remember the last time I completed a single player campaign only to immediately begin over again; such is the satisfaction that Resident Evil 5’s slaughter-fest supplies. I could easily have filled this entire review with a list of the inventive set pieces and novel “movie” moments that the game provides, but that would be have been mean. Sacrificing scope for linearity, Resident Evil 5 is a gorgeous beast to be sure, full of neat graphical touches that have defined the series since Chris and Jill found their first brain-munching corpse over a decade ago. Heads explode like watermelons, colossal brutes drop to their knees as you shoot their legs out, and the shaky-cam melee animations that include Chris sending Majini reeling with an uppercut or Sheeva slitting their throats from behind, never grow old.

The voice acting efforts have only marginally developed from Jill sandwiches and such quotable lines as “I thought that you, the master of unlocking, should have this,” but fans of this franchise will welcome the naff dialogue back as part of the Resident Evil experience. Sheva’s insistence on ending every sentence with “partner” (in case you mistake her for the undead) also grates after a while, reminding you of the Capcom cheese factor in even the tautest moments. The excellent soundtrack, which frequently evokes James Horner’s work on Aliens, adds the final sheen of overstated Hollywood bravado to every single scene.

Cumbersome, dated controls and an occasionally inept AI partner would be enough to send most games into the forgettable territory of the mediocre, but every other element of Resident Evil 5 is so totally, utterly awesome that to hold the game’s shortcomings against it would be petty and inane. My one personal gripe with Capcom’s latest is that for perhaps the only game franchise to have invented its own genre, this “survival horror” fails at both, making the survival too easy and forsaking horror for action. While Residents 4 and 5 have been much, much more than a mere digression from the series’ roots, it would be nice to see the next game in the series return to those rancid, shuffling corpses of yesteryear. Y’know, good old fashioned zombies.