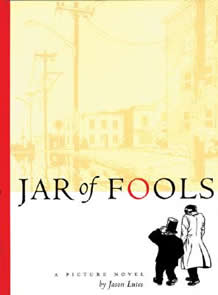 2000, Drawn and Quarterly
Written and illustrated by: Jason Lutes

There’s a scene near the beginning of Jason Lutes’ Berlin, set in 1928 Germany, in which two characters joke about the changes their country is undergoing. Of course, they would have no idea of the scale or severity of things to come, but it’s a striking moment nevertheless. Life goes on, regardless of social or political shifts. The first of three volumes in an ongoing 24-chapter story set from the twilight years of Germany’s Weimar Republic to the birth of the Nazi Party, Berlin is rife with these subtle character moments. At its heart it’s an old-fashioned, Brief Encounter style romance between world weary journalist Kurt Severin and isolated art student Marthe Müller. Lute’s plot often veers away from this plot, and into other areas, dealing with Germany’s gradual shift towards Nazism from the various perspective of a large ensemble of characters.

As ambitious as the book is, it suffers sever pacing problems. Kurt and Marthe’s relationship is the book’s strongest factor, but when Lutes’ meandering narrative leaves these two for any length of time, the book is suddenly less enthralling. As interesting a setting as this may be, the plot far too often leaves its human dynamic behind for the sake of a history lesson.

There’s no debating Jason Lutes’ talent in the storytelling or art departments, but City of Stones just didn’t engage me in the way that his previous book Jar of Fools did. I’ve always found it difficult to justify reviewing individual books in multi-volume series, and Berlin is clearly intended to be read as one book. Lutes allegedly spent two years researching his saga, and it shows, in both his script and the intimate, meticulous artwork.

Lutes’ passionate leads and the altering landscape around them are portrayed affectionately and cerebrally, but never at the same time. Only time will tell if such an overreaching project will pay off, but I will definitely be willing to give his ambitious epic a second chance when it’s published in full.