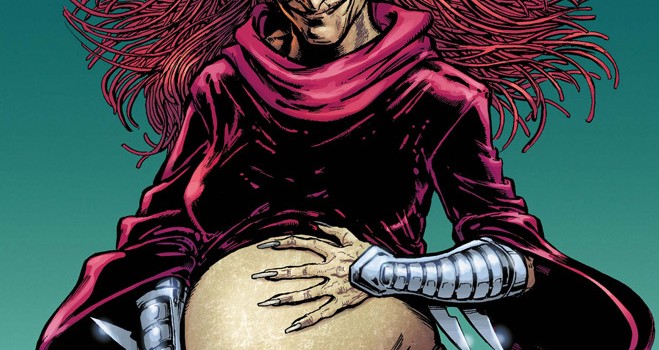 After a spate of mediocre standalone issues and the pointless ‘24/7’ arc, Spidey’s assimilation into the Dark Reign event has given the series a much needed shot of adrenaline. For anyone left dangling by last issue’s shocking cliff-hanger, I think it’s fair to say that Parker’s brains are still intact, even though Norman Osborn did indeed shoot him point blank in the face. Unfortunately, this means that Spidey gets to spend the majority of this issue being pampered by Bullseye and his collection of razor-sharp instruments. Since Peter took a trip to the Macroverse with the Fantastic Four and lost two months of his life, Harry Osborn’s quest to redeem the now pregnant Lilly has been the most interesting aspect of this series. Also at the centre of ‘American Son’ has been Osborn’s pet project of the same name, a marketed hero that the US will grow to love… and practically worship when he’s dead. Norman’s plan to kill this patriotic entity and profit from his martyrdom was a wry touch, and not a world apart from the cutthroat tactics used by a certain pair of competing mainstream publishers. At the end of this issue Harry finally takes a side, but whether or not he’ll remain the American Son for long is another matter. I feel like I’ve resorted to contrived journalistic hyperbole by remarking that I can’t remember the last time I’ve anticipated the next issue of Amazing Spider-man as much as I do now. Given the direction this series has taken, that’s probably not saying much, but Joe Kelly has the right approach to writing Spider-man. He keeps the pacing relentless, the angst to a minimum, and ensures that our everyman webslinger plays a fundamental part in the Marvel Universe’s most interesting events.