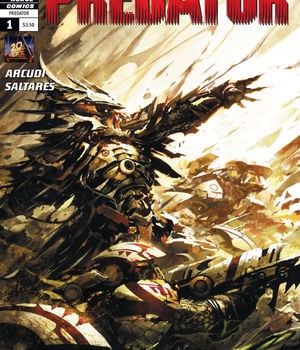 The first issue of Dark Horse’s Aliens comic resurrection released several weeks ago was a solid if pedestrian return to the franchise, saved by some decent dialogue and a genuinely unexpected twist. Hot on that series’ heels is the Predator, that other extraterrestrial monster that has spawned so much from one great movie.

Usually at this point in a comic review it’s conventional to introduce the plot, but this 4-part miniseries doesn’t really make an effort to have one. The Predators are once again on vacation in present day earth, East Africa, where continual feuds present the perfect hunter’s playground. And that’s as far as we should care, apparently. This time their prime human adversary appears to be burly military contractor grunt Thorpe. Mercenaries are currently enjoying the sort of glamorisation that ninjas have long enjoyed in movies and comic books. You only have to glance at the news to appreciate that these guys aren’t quite the lovable rogues that this series has in mind.

The original Predator movie spent a great deal of time racking up the tension as the unseen alien stalked its prey. Here, the nondescript invaders attack on the second page. This isn’t helped in any way by John Arcudi’s poorly fleshed out characters, a bunch so totally and utterly unsympathetic that it’s impossible to care who falls first once the Predators begin their assault.

I generally like to think of myself as an optimistic reader, and get no enjoyment from writing a sour review such as this. I go into any comic series or graphic novel happily aware that it may not be a revolutionary work of literature, and it’s not often that I struggle to think of one positive thing to say about a book.

Actually… Raymond Swanland’s cover art is stunning. There you go.