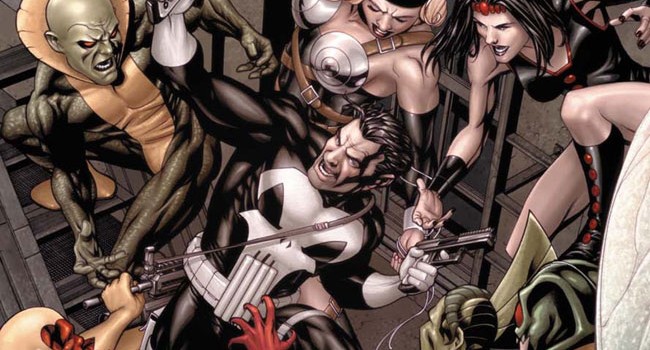 One of the most enjoyable facets of Dark Reign, this rebranded Punisher: War Journal has so far been a blast. With Norman Osborn’s sovereignty overshadowing every major Marvel title at the moment, Frank Castle has his work cut out for him, and Rick Remender has so far kept this series about as dynamic and unyielding as is possible. Unlike Brian Michael Bendis, he doesn’t require an entire issue to set up the next big confrontation, yet his action scenes always feel purposeful to the greater plot.

Last issue saw the Hood resurrect a dozen dead supervillains, all B-list losers who were killed by the Scourge of the Underworld. Now convinced that Castle is the Scourge, and given 30 days to lives, these guys are already resorting to desperate measures. Fortunately, Castle still has some tricks up his sleeve, namely a cache of stolen super-powered gadgets… and a hoverboard. Remender’s Fear Agent cohort Jerome Opena has been replaced with Tan Eng Huat (Doom Patrol vol. 3), whose work is almost as well suited to the book – not too slick as to undo the comparatively grounded nature of the Punisher, but energetic enough to showcase the superhero scenes.

Frank’s latest computer whiz-kid sidekick, Henry, is still a little two-dimensional at the moment and has not been fleshed out beyond the purpose he serves. But if that purpose at present is to guide the Punisher through his vendetta against every villain and crook in the Marvel Universe, then that’s fine by me. Evidently, Henry’s past and motivations will eventually come into play, but for the time being I hope he lasts longer than Frank’s past buddies. Castle has been going it alone for far too long.