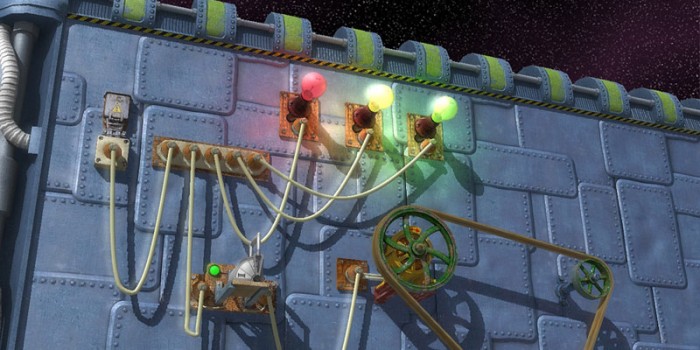 Those ingenious Rube Goldberg puzzles are back in Crazy Machines 2 Complete, the spiritual successor to the popular 90s series The Incredible Machine. When I reviewed the first Crazy Machines I was wowed by the game’s ingenious puzzles and realistic physics, but found that it often required a higher intellect than my feeble noggin will ever be capable of supplying. Well, it’s good news for those who also found Crazy Machines a bit too demanding on the grey matter. This sequel effectively improves upon every element of the original, with a more accessible single player experience, superior presentation and an excellent puzzle creating tool that allows gamers to share their most diabolical inventions.

Whereas most popular puzzle games originate from the Tetris block-building bloodline, requiring you to revert to an almost hypnotic state and rely on instinct and hand-eye coordination, Crazy Machines encourages a methodical form of lateral thinking that asks more of gamers than they may be accustomed to. It’s perhaps one of the few games one might recommend to parents of precocious children with a scientific inclination. But to anyone who just wants a bit of entertainment, Crazy Machines 2 caters also. For those unsure what a Rube Goldberg (or Heath Robinson) puzzle is, it’s a complex and elaborate device that fulfils a simple task in the most elaborate and convoluted way possible. Most gamers will be familiar with the board game Mouse Trap, or those crazy domino effect chain reactions that can by found on YouTube. Mentorship and constructive criticism is provided by the Professor, who closely resembles Einstein but sounds suspiciously more like the loony Dr. Fred Edison from Day of the Tentacle. His introduction to each puzzle often attempts to put some real world context to the goals; some shelves need tidying or his, ahem, wiener requires roasting.

The Professor’s presence irritates far less than it did in the previous game, with more varied but less frequent observations made throughout. He will often outline your goals for each puzzle, circling the elements that need moving and sketching arrows to provide an initial idea as to what you are required to do. The puzzles in Crazy Machines 2 may be as perplexing as ever, but you’ll spend less time scratching your head and wondering what the game expects you to do, and more time instigating a solution.

For those who found that the original Crazy Machines caused their delicate brain to ooze through the ears and nose, perhaps the biggest addition to this sequel is a well implemented hint system. Hints are offered at a cost of points, with subtle text clues and the option to “spy” – a searchlight highlights one portion of the puzzle, possibly revealing a small part of a potential combobulation. The game is relatively generous with these, and it is possible to get a gold rating on most levels while taking advantage of several hints. There is also the ability to reveal entire chunks of the puzzle at the cost of all points, which is arguably against the spirit of such brainteasers, but may relieve your mental anguish if you find yourself thoroughly stumped at one particular stage. Perhaps the most conspicuous update to this sequel is the visual overhaul, with the original’s insipid visuals given a heavy coat of paint. You are now able to tilt your playing field, which may seem like an obvious but unnecessary aesthetic touch but it does prove crucial when the camera occasionally obscures item placement. Quite why the contraptions are now built on the sides of warehouses, cathedrals and office complexes rather than in a workshop or lab eludes me, but it does allow for more visual variation and a far more inviting game.

The set-ups are also made more interesting – or problematical, depending on your perspective – by secondary goals, such as ensuring that a flaming arrow not only lights the torch it is directed towards but bursts a nearby balloon. Bonus points are also awarded for using as few items from the toolbox as possible. While this doesn’t really come into play in Crazy Machines’ earlier levels, you’ll soon be required to think outside the box regarding how you solve each puzzle. For example, placing a loose component in mid-air and letting gravity work its magic can often be as good a solution as any more ambitious resolution. Speaking of gravity, Earth’s magical pull is also a variable that is prone to change. Add to such devices as teleporters and build-your-own robots into the mix and it’s not unusual for the puzzles to jump between plausible steam-powered engineering problems and zany science fiction brain-twisters.

Beyond the First Steps Tutorial, the core of the single player experience is the World Tour mode. With 150 spread over multiple nations – though this is rarely implemented into the gameplay beyond a background change and the occasional series of puzzles with a running theme – there’s more than enough to keep you busy. The Complete package also contains numerous accompaniments, including the Back to the Shop add-on (60 levels), further bonus download levels and several puzzles that were used to platform the Ageia PhysX physics engine.

For those brainiacs capable of completing all these, there’s also the extensive user content. Accessed and shared via an online account, there’s a potentially endless supply of puzzles. Not all of them work as well as intended, but it’s admirable how sophisticated some of these levels are. Despite the ability to tilt each environment the puzzles still remain in 2D, making the design tools themselves pretty intuitive; though given the particular nature of the game’s simulated physics, creating an elaborate contraption is far more intricate than it may initially appear. But with user ratings assigned to every puzzle, there’s definitely a lot of satisfaction awaiting those with perseverance and patience.

Despite the visual enhancements and a more considerate interface, Crazy Machines 2’s core gameplay remains practically unchanged from its predecessor. What Fakt Software have done, however, is provide the same cerebral gameplay in a much more accommodating package. Add to that the involving creative tools and extensive selection of user created conundrums, and you have a puzzle game that will provide you with as much as you are willing to put into it.