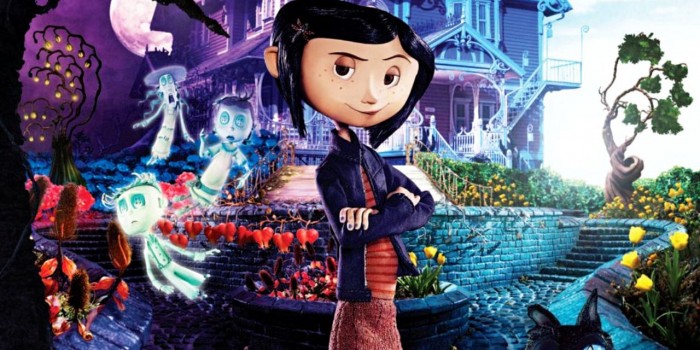 If one were to derive anything about children purely by watching the entertainment Hollywood provides them, they’d likely come to two conclusions. Firstly, that kids ain’t too bright, secondly; they’re fragile little creatures that are easily scared. Roald Dahl always knew different, and was well aware how sadistic the crafty tykes could be, which is precisely why his gruesome modern Grimm Fairy Tales are still popular with devious children and puckish adults today.

Having already adapted Dahl’s novel James and the Giant Peach, as well as the quaintly macabre The Nightmare Before Christmas, director Henry Selick clearly isn’t afraid to make films that border on disturbing. Based on Neil Gaiman’s breezy but imaginative book, Coraline is a visual extravaganza that is consistently inventive, creepy and witty. Coraline (Dakota Fanning) isn’t your usual child protagonist. She’s spoilt, temperamental, and unappreciative of her work-consumed parents, who both write about gardening but are reluctant to get their hands dirty with the real thing. When they relocate from Pontiac, Michigan to the Pink Palace Apartments in Ashland, Oregon, she’s not particularly pleasant to her new neighbours either; freaky loner Wybie and his stray cat, has-been actresses Miss Spink and Miss Forcible (a bickering Dawn French and Jennifer Saunders) and mouse-training acrobat Mr. Bobinsky (Ian McShane).

Only when Coraline discovers a small door in her new home is she is able to escape to an alternative universe where everything is a more attractive and enchanting version of her own dreary environment, and button-eyed doppelgängers of her parents ceaselessly cater to her desires for attention and good food. Needless to say, this replacement reality isn’t what it seems, and Coraline’s “Other Mother” (Teri Hatcher) soon insists that she too replace her eyes with buttons. And if that sounds too disturbing for your sensitive littluns, then it probably is. With an ethereal art style and loose narrative that at have more in common with the sensitivities of traditional European animation than anything produced in America, Coraline is a labour of love that should connect with anyone that loves cinema. It’s as much a tribute to the art of filmmaking, middle finger extended to any notion of creative boundaries, as it is an engaging children’s movie. Even the score by French composer Bruno Coulais is underplayed, often evoking the most nauseating moments of David Lynch’s not-quite-right realities.

Those able to see Coraline in 3D should definitely opt for the goggled experience. The stop-motion models show the technology off to optimum effect, with the almost decoupage-layered dimensions that might appear uncanny with a live-action feature adding to what at times feel like a theatrical stage of dancing maquettes. I do worry that the 3D enhancement might detract from Selick’s most ambitious and lovingly crafted feature yet; Coraline would be nothing short of extraordinary minus the third dimension, and will probably only get the attention it deserves when it hits DVD.

All this forbidding talk of “art” shouldn’t discourage anyone, parents and children alike, from seeing Coraline. Once again Selick has crafted a children’s movie that reaches out to its young target audience without a trace of condescension. Coraline is not only a joy but an absolute rarity; a movie that balances an intimate creative project with a commercially viable product.