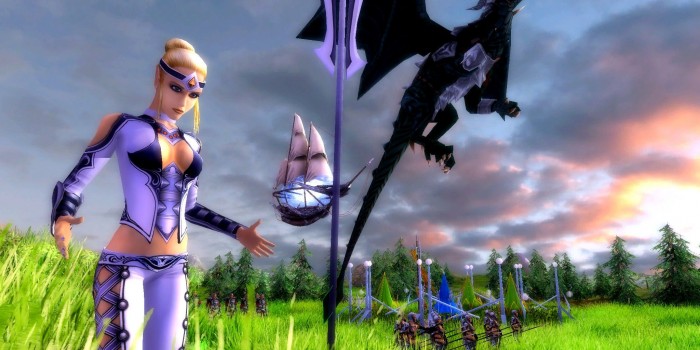 When reviewing videogames a regular basis, it becomes increasingly rare that you get to try a new product with no prior knowledge or preconception attached to it. There’s something to be said for going into unfamiliar territory and (if you‘re lucky) coming away pleasantly surprised. Elven Legacy is one such gem, a neat turn-based strategy that were you to glance over a few screenshots you’d be forgiven for dism  issing it as a Warcraft derivative. The sequel to 2007’s Fantasy Wars, a game which escaped my radar entirely, Paradox Interactive’s Elven Legacy offers a level of hex-grid strategy that, despite some technical issues and a difficult single player campaign, is both accessible and deep.

For those unsure what a hex-grid is all about: essentially your units move across hexagonal spaces on a superimposed board, with each side taking it in turns to spend their pieces movement and combat points. Not unlike the boardgame Risk, then, but with all the visual bells and whistles that PC gamers have come to expect. Thankfully, Elven Legacy is hospitable to those new to this genre; right clicking any unit brings up their perks and abilities, and the HUD is especially straightforward. It’s also a lot of fun, with appealing units, great presentation and an involving story mode. Elven Legacy has over 100 distinct units in 5 armies, including powerful hero units. All have their unique quirks; knights are especially impetuous, attacking adjacent enemy even when not directed, while archers add support to any close combat units they are adjacent to. The game flaunts some superb fantasy designs, with the detailed character pieces changing size depending on how far the camera is panned out – squads of ten men are suddenly represented by one giant playing piece. I initially found this offputting, but once you get used to it, Elven Legacy does a near perfect job of balancing a (relatively) realistically scaled environment with the representative pieces that reveal its tabletop wargame origins. The smaller models attack their enemies with some entertaining combat animations, and while these are initially fun to watch you’ll need to lose this intimacy with your units as the scope of each progressive battle expands.

The premise behind Elven Legacy’s campaign, as told via an animated storybook intro, is that the shadows of destruction have been unleashed by an intrusive human mage. The ever secretive (i.e. haughty) Elves are forced to enter the lands of man for the first time in countless years to reverse this dark tide and ensure that such knowledge does not make it into the wrong hands again. The campaign mode’s narrative isn’t exactly Lord of the Rings, but it effectively moves you from mission to mission. There are also some motivating dilemmas thrown into the plot as secondary objectives, such as whether or not to raid the villages in certain regions. Frequent conflicts of interest threaten to test your principal characters; the benevolent ranger-lord Seagate, who wishes to avert combat wherever possible, and sorceress Gilwen, who is intent on pillaging indiscriminately. Add a branching mission structure and multiple endings, and there’s a lot to bring you back to Elven Legacy’s single campaign a second time, though it would have been nice to be able to play as Orcs or Humans as well. The experience your units collect provides increasingly powerful perks, allowing you to customise your troops to any particular combat situation or even upgrade them into entirely new units. Injured units can sacrifice a turn to heal their wounds, but any replacement soldiers added will eat at the unit’s experience bar. Do you charge your indispensable units into battle or tread carefully, levelling up your troops at the expense of the big bucks a Gold Victory provides? It’s this conundrum that makes Eleven Legacy’s single player experience not just addictive but emotionally involving. Losing a unit of highly proficient archers that have served you from the very first mission can be embarrassingly upsetting, not to mention detrimental to your army.

The campaign’s difficulty is pretty steep, and though the tutorial does a good job of teaching you the basics, the rock-paper-scissor nature of the game soon becomes far more intricate than all but the most experienced strategy gamer will be able to manage. Your men are frequently outnumbered by 2:1, and you’ll often be thrown by just how devious the enemy AI can be; especially as it’s game over if Lord Seagate kicks the bucket. Fortunately you are given the option of changing the difficulty between missions, and I can see many players automatically opting for the medium setting only to switch to easy several levels in… and give up entirely soon after. The game autosaves your progress at the start of every turn, and though the opportunity to reverse your blunders does undermine your decisions somewhat, it’s a procedure that you’ll need to fall back on time and again.

Rewards are granted for completing missions within a minimum of turns, though each mission also has a maximum number of turns that can be taken before it’s aborted. While this prevents you from simply holding back several turns and healing your units between skirmishes, the “time limit” adds only further to the campaign’s severe difficulty. It is possible to revisit previous missions in order to get that coveted gold reward, but this regrettably requires you to also replay all subsequent missions. As well as the campaign there are a series of preset single player scenarios, and of course the obligatory multiplayer, which can be played via LAN, internet or hotseat (multiple persons at a single computer). The latter is a great way to play what is fundamentally a modern take on chess, but it’s something of a missed opportunity that the available factions are limited by whichever of the 16 maps you play. Absent from my review copy were the accompanying level creator tools, allowing players to create and share their own missions through multiplayer.

Varied and interesting environments and a sense of character make Elven Legacy a very appealing game to look at. As mentioned earlier, the unit designs are great, if not particularly innovative. Mounted Elves ride by deer rather than horse, Orc Shaman spells involve huge skeletal spirits rising from the ground and devouring foes, while hovering wyverns and rickety airships populate the sky. The voiceover work would be cringe worthy in any other game than this, but is as crassly solemn as the lurid fantasy setting and its pointy-eared immortals deserve.

Others have experienced technical difficulties with Elven Legacy, and it should be noted that the game ran fine on my PC only after I’d downloaded a patch which fixed numerous technical issues; primarily in-game crashes, language problems during the tutorial and video memory detection in vista.

It’s a great shame that Elven Legacy’s single player campaign is so ruthless, as the core gameplay is about as accessible as turn-based strategy gets. This is not to say that the campaign is impossible, but that it will perhaps deter all but the most hardcore strategist – and the game deserves to attract a far wider audience. Nevertheless, the multiplayer skirmishes can be immensely satisfying, particularly the hotseat mode, and with the upcoming Ranger expansion pack, there’s a lot to recommend about Paradox’s vibrant fantasy romp.