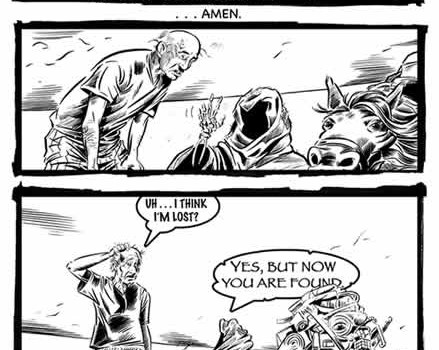 An ineffectual everyman finding himself sucked into a fantasy world is hardly a new concept, but it’s always been an effective one, allowing us to see foreign worlds from a relatable perspective. Volume one of The Field on the Edge of the Woods puts a neat little twist on this convention, with elderly fellow Gary “falling asleep” in front of the television, and finding himself in a dark forest, suddenly pursued by impish Dark Nasties. The Field on the Edge of the Woods

Fortunately, Gary is rescued by a rather diminutive Grim Reaper, if being greeted by Death could ever be considered fortunate, to whom he makes the mistake of revealing his former vocation as a TV producer. Alarmingly, even Death has a killer script just waiting to be read, entitled ‘How I Got My Ugly Face’, and asks the critical Gary to give it a read. Yes, The Field on the Edge of the Woods is essentially the origin story of the Grim Reaper. And his ugly face.

For some indefinable reason this book reminded me of very early Cerebus the Aardvark; not purely because of the similarities in Loran Skinkis and Gary Morgan’s monochromic art, but perhaps the sense of humour that seems to rear its head during the most inappropriate moments – such as how Gary interrupts or nitpicks Death’s tale whenever it reaches momentum. One of Woods most striking aesthetic elements is its use of words, which are often incorporated inventively into the imagery rather than just floating in front of it. Frick Weber’s writing is also quite inspired, with his dialogue bouncing between that pompous tone so closely associated with fantasy and ample doses of crude humour.

The Field on the Edge of the Woods is printed in the smaller digest/minicomic format. I recently visited the Birmingham international Comic Show 2009, and it’s apparent that more and more self-publishers are favouring this format. Maybe it’s purely down to printing costs and the success of imported Manga… or maybe because, as Warren Ellis has previously remarked, this smaller scale gives the comic a level of portability. Sometimes it’s nice to have a graphic novel you can just shove in your jacket pocket and read on the train or bus.

A quick mention should also go to the team’s promotional adeptness. Not only is this a lovely looking book, but the script, layout and pencils samples at the rear give it an intimacy that is usually reserved for mainstream releases. The site also features a wonderful video trailer, which is one of the best examples of motion comics I’ve ever seen; even if I’m still not convinced that the next evolutionary step for comics involves animation.

Visit www.filmsandcomics.com for more on ‘The Field on the Edge of the Woods’, including the video trailer and a 28 page preview. Book 1 is available at just $3.99, 44 pages.