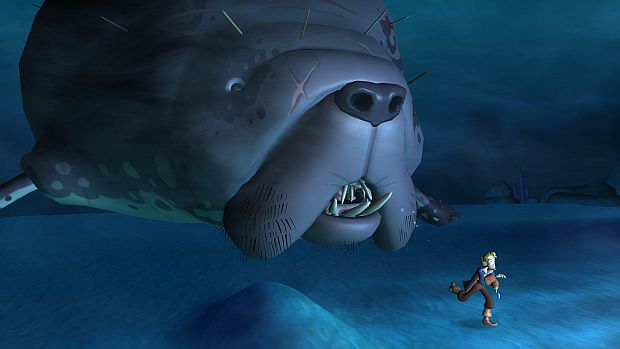 The third episode in Telltale’s Monkey Island revival delivers more lovingly crafted Threepwood antics, even if the plot takes a back seat this time round.

If there’s one thing to expect from the Monkey Island series, it’s the unexpected. When Guybrush Threepwood and company were swallowed whole by the titular Leviathan, I doubt that many could have predicted that this third chapter in the Tales of… series would incorporate a humorous take on The Newlywed Game, an bizarre underwater tribute to Cyrano de Bergerac, and a trio of drunken pirate frat-boys. In many ways ‘Lair of the Leviathan’ is the most creative chapter so far, and the return of a certain fan favourite also helps make it the funniest. Yet it’s still indefinably difficult to feel involved in the overall plot; I originally described Chapter 2: ‘The Siege of Spinner Cay’ as the “second dish in a prolonged five course meal”, but if that’s the case then Chapter 3 is more of a side order. Plot-wise it fulfils its purpose, concluding Threepwood’s search for La Esponja Grande, yet many characters such as Elaine and LeChuck are given such minimal screen time that the episode ultimately feels removed from the previous two.

This may be due to the fact that much of Threepwood’s third Telltale outing is spent inside a giant manatee, wherein our ineffectual swashbuckler finally locates Coronado De Cava, a Spanish explorer whose years in isolation have driven him more than a little barmy. This new location does at least offer environments discernible from the previous offerings; the manatee’s interiors are expectedly gross, even if the surfaces do occasionally look like spaghetti hoops. Threepwood is once again missing his wife Elaine Marley, and his handy Pyrite Parrot is presumed lost at sea, so the welcome return of Murray the Demonic Talking Skull is likely to be the highlight of the game for many series supporters (I’d imagine LucasArts adventure fans comprise much of Telltale’s audience). Once again voiced by Danny Delk, Murray’s repertoire of grandiose threats, world-conquering delusions and general contempt for the living is inexhaustibly hilarious. When picked up he’ll frequently criticise Threepwood’s inventory, and he even returns during the end credits to belittle the production crew. You can have too much of a good thing, but I would be great if Murray returns once again, if only briefly, before this series is up.

Other new characters include De Cavo’s lost crew; Moose, Noogie, Bugeye and the skeletal remains of Santino, who are living it up as a fraternity inside the manatee. None of these characters rank alongside the franchise’s best, but neither do they feel as clichéd as many of the residents on Flotsam Island. It’s during Threepwood’s enrolment into this fraternity that the Pirate Face-off minigame, the spiritual successor to insult sword fighting, makes its debut, and it’s great fun if not particularly demanding. The pirate hunter Morgan LeFlay also plays a far larger part here than in Chapter 2, and it’s nice to see her character expanded beyond what initially seemed a rather uninspired female antagonist. It may seem odd that I’ve yet to mention ‘Lair of the Leviathan’s gameplay, graphics or sound. Is there really any point? As ever, the voiceovers are as ever excellent, the graphics and character designs not far away from a CGI animated feature, and the gameplay is… okay. There are still some control issues present, with Guybrush’s ability to run inexplicably disabled at random points, and the navigation map that allowed travel from one island to another is sadly absent.

But Monkey Island isn’t really the sort of game that deserves to be criticised for such shortcomings. If you appreciate amusing characters, ingeniously witty dialogue and some funky Caribbean music, then you’ll likely look beyond any technical of budgetary limitations that Telltale’s games continue to bear. Many have condemned the series’ lack of replay value, but again this is a problem inherent in all point ‘n’ click games. I’m positive that in a few years time, I’ll metaphorically dust off my digital copies and laugh like an maniac all over again… in fact, I look forward to it.

As fun as ‘Lair of the Leviathan’ was, there’s still a niggling feeling that this series as a whole could be more cohesive. The dialogue in Tale of Monkey Island is brilliant, the new characters are inspired, and Telltale always manages to nail the puzzle element perfectly… yet the chapters themselves don’t appear to be forming the grander narrative that the first episode suggested.

Still, if you’re still reading this then you’re likely a conscious sucker for everything Telltale produces, rather than someone who doesn’t quite “get” adventure games. The former party will definitely find more than enough in this instalment to enjoy, while trying to convince naysayers that an afternoon of hilarity and head-scratching puzzles is easily worth a few quid is a waste of time.