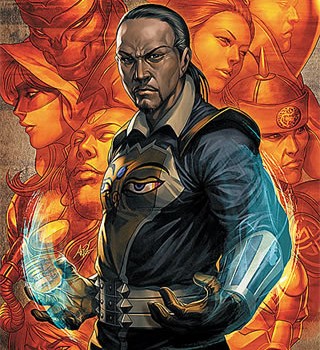 Of everything to have arisen from 52, the Great Ten (essentially China’s equivalent of the Justice League) were one of the most interesting additions to the DCU. It’s somewhat peculiar that it’s taken several years for DC to give the team their own title, but then maybe none have been brave enough to tackle the project. A law enforcement group under strict discipline of the Chinese government, the Great Ten are a team that could be handled intelligently or woefully. Fortunately, Tony Bedard just about accomplishes the former. Just. The Great Ten #1 - The Perfect Physician

Each issue of The Great Ten will reveal the back-story of one member. This issue focuses on the Accomplished Perfect Physician (each member’s name is a literal translation of their Chinese title) so far the only likeable member of the team. His origin tale, however, is a bit of a letdown – Bedard shamelessly rips off Doctor Strange – and fails to do justice to the Physician’s interesting verbal abilities.

Scott McDaniel’s overly-stylised and inconsistent pencilling has received much criticism, but it’s far more the case that he’s a poor choice for the series. My main issue with this series is that the main story arc, which commences with four of the Great Ten being dispatched to calm Lao Qigong protesters, isn’t handled as well as it could have been given the thorny and highly relevant subject matter. Though Bedard does a good job with the mythological elements, far too often his characters slip into American superhero mode – but as I said earlier, this was always going to be a difficult book to write.

The Great Ten had the potential to be a fascinating series, but McDaniel’s incongruous art and Bedard’s occasionally sloppy dialogue are currently stopping it from being anything more than readable. It’s far from a bad debut, though, and anyone who enjoyed the team in the pages of 52 and Checkmate might want to check it out.