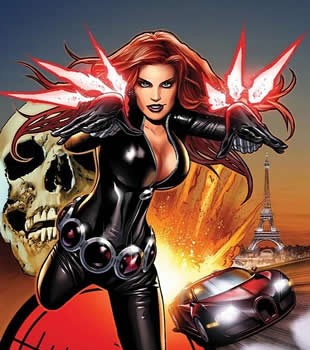 The upcoming Iron Man sequel has seen renewed interest in Natasha Romanova, and this quality origin story is definitely the way to go about promoting the super-spy to a new generation of comic readers. Paul Cornell, whose recent Captain Britain series was criminally overlooked, kick-starts the series with a fabulous Bond-inspired scene that’s so preposterous that it’s easy to imagine the Roger Moore era 007 doing the exact same thing.

The issue then takes a more solemn direction, with the murder of Romanova’s former mentor, and a series of grim flashbacks to her training as a Soviet spy. Tom Raney pencils the present scenes, with John Paul Leon’s more intriguing artwork prompting the past. While I’m not generally a fan of multiple artists on one issue here it works rather well, with the disparate art suitably reflecting Black Widows bleak upbringing and comparatively optimistic present.

The inclusion of Wolverine in Deadly Origin felt forced, but if Logan’s presence in this series sells more copies, then so be it. Black Widow has always been one of Marvel’s most complex heroines, and this series has been long overdue.