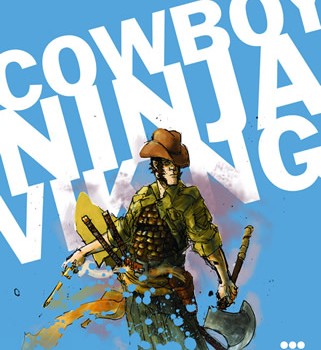 Generally it’s pretty easy to summarise a new comic series by its title, and I like to think I’d be forgiven for assuming that Pirate Ninja Viking was a lazy parody of crossover events and genre mish-mashes. Well, I couldn’t have been further form the truth; Image’s oversized new series is a bizarre blend of cool and crazy, rife with surreal comedy and hyper-stylised violence that will appeal to fans of Afro Samurai, The Losers and the video game No More Heroes. The biggest surprise here is the lack of cowboys, ninjas and Vikings. The series focuses on Duncan, the former subject of a government experiment that bonded him with the three latent personalities of the title. There’s also Duncan’s alleged erstwhile nemesis Yashitiko Ammo, another “triplet” who’s best described as a Pirate Gladiator Aquanaut.

Despite this absurd premise, Lieberman (Martian Manhunter, Gotham Knights) actually manages to craft a pretty good story, even if he does overcompensate for CNV’s shallow plot by cramming as much Tarentino-esque dialogue into his convoluted story structure as possible.

As previously mentioned, Cowboy Ninja Viking is published in the wider, golden age format, which not only makes it stand out on the shelf, but allows Riley Rossmo (Proof) to go berserk with his page compositions. His black/white/blue work is unlike anything else on the market today, and brings both oomph and clarity to what could have proven an otherwise unremarkable book. That his character designs fits somewhere between manga and Western comic trends without feeling obliged to either is quite remarkable.

There are some genuinely inspired touches in Cowboy Ninja Viking, such as the distinct speech bubbles used for each personality, and a nonlinear narrative that requires a second read to appreciate (or even understand), that this series should at least be tried by reader with a taste for something different. Whether they’ll enjoy it is another matter entirely; but few could contest Lieberman and Rossmo’s creative energy.