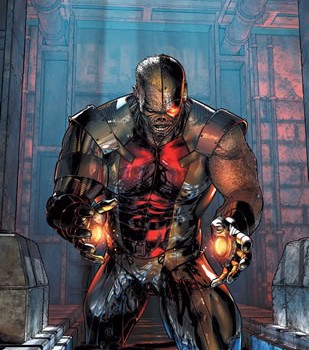 In comic books, perhaps more than any other storytelling medium, there seems to be a large percentage of new titles that are proficiently written and finely illustrated, but so thoroughly lacking in likeable characters that it’s hard to care how Issue 1 turns out, let alone anticipate Issue 2. This first instalment of Deathlok volume 4, written by crime author Charlie Huston, is the perfect example of a series that is witty and intelligent, but completely lacking in heart. While Huston‘s work on the 2006 Moon Knight revival was a measured (some might say sluggish) but conventional tale of personal redemption, his Marvel Knights take on Deathlok is pretty much the opposite of everything being published by Marvel at the moment. A bold, futuristic reboot that would have  been more at home in early 80s 2000AD, ‘For One Purpose Trained’ borrows elements from numerous movies (largely The Running Man, Verhoeven’s Starship Troopers and Robocop) but its satire has sharp enough teeth to stand on its own.

Deathlok: The Demolisher is set in a supposed near future where war is fought by small units of highly trained soldiers, whose job is not only to butcher their enemies but please a live TV audience.  Huston’s satire lashes out at the media, modern warfare and American sportsmanship with such aplomb that it’s tempting to overlook the fact that his central characters, the United States team Roxxon Rockers, are all assholes. Throw in enough XXXX expletives to make Gordon Ramsey blush, and the issue failed to entertain me half as much as I felt it should.

Fortunately, Lan Medina’s outstanding art and brilliant tech designs, as well as some truly dazzling colour work by Brian Heberling, help to make this a series that could still become something pretty special. Bland lead Mike Travers has yet to make his transformation to the titular cyborg, but here’s hoping that when he does so next issue, Huston injects a small quantity of humanity into an otherwise solid title.