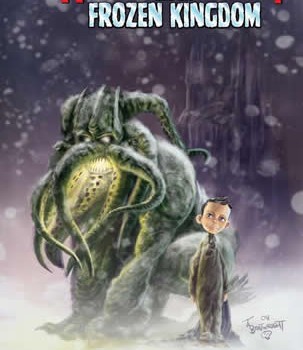 H.P. Lovecraft didn’t lead what could be described as a happy life. During his childhood he watched his father rot in a mental asylum due to a misunderstood variety of syphilis – surely the groundwork for his later fascination with the nature of madness – while in adulthood he wrote in relative poverty, his writing only receiving acclaim after a painful, extended death to cancer at the age of 46. Howard Lovecraft and the Frozen Kingdom chronicles the fictitious adventures of the young horror author, and is a graphic novel aimed at introducing younger readers to Lovecraft’s warped dimensions and dark deities. It begins with Lovecraft visiting to his father in the Butler Sanitarium one frosty Christmas Eve. Lovecraft Sr. has evidently lost his marbles, and warns Howard of a book of his notes that are dangerous, and should be destroyed.

Conveniently enough, Howard’s mother soon unwittingly presents him that same book as a Christmas present, a tome containing words so powerful that when read aloud they transport Howard to the frozen wastelands of R’lyeh. Here he encounters, amongst other things, the rather mannerly Thu Thu Hmong – for those not in the know, another name for the hideous, malevolent cosmic god Cthuhlu – who Howard affectionately names “Spot”.

I went into Howard Lovecraft with a casual knowledge of both HP and his work, and Frozen Kingdom didn’t add any interesting nuggets to my databanks – but I was probably mistaken in expecting that it would. When I read that Howard Lovecraft was intended as a junior entry level into Lovecraft’s forbidden worlds, I just naturally assumed that Bruce Brown would lean towards writing a children’s tale with an adult edge.

Looking at the story a second time, however, it clearly couldn’t have been delivered any other way. By keeping the tale simple, Brown has avoided the pitfall of bewildering his target readers with incessant references to an author and a fictional world that they no nothing about. Simplicity is an understated art indeed; that Howard Lovecraft and the Frozen Kingdom focuses purely on reaching that younger audience is commendable.

The book is illustrated by Renzo Pedesta, whose work on the excellent Hum shone brightest in the brief colour sections. His art still retains the strong use of shadow and silhouette as was seen in Hum, and Pedestra also makes great use of gothic horror perspective, especially in the initial real-world scenes. Visually, Howard is the book’s only real weak spot; Pedesta illustrates him as impish, heroic or terrified from one panel to the next, with bulging eyes that change shape and size in a most off-putting way. But otherwise it’s a fine looking graphic novel, and Pedestra manages exceptionally to balance the vile creatures of the Cthuhlu mythos with an elegantly painted, gore-free art style that is going to appeal to younger readers with a taste for otherworldly terrors.

In converting Lovecraft into an action-orientated all-ages title, Brown has had to sacrifice much of the agonisingly prolonged tension and intellectual nature of his work. That’s probably enough to put any adult Lovecraft enthusiast off, but while I have no younger comic readers at hand to get a direct opinion, it’s highly likely that they will be enchanted by Brown’s use of the Cthulhu mythos and Pedesta’s eerie yet wholesome art.

If you happen to be an older comic buyer looking for a way to get your children into comics then look no further. They’ll surely lap up the adventure, the monsters and be hooked from the effectively ominous introduction of Howard Lovecraft and the Frozen Kingdom onwards. And if a tiny proportion of those fledgling dreamers subsequently discover a love for Lovecraft’s cosmic horror in later life then Brown has done the world no small favour.

One thought on “Howard Lovecraft and the Frozen Kingdom Review”