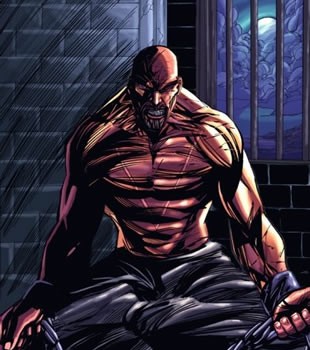 Many modern comic and movie scribes seem to forget this, but nothing makes for more effective horror than the unseen. That blurred figure in the corner of your perception. A skulking shadow in a moonlit hallway. The first issue (of four) of Jamie Gambell’s Omnitarium quite uniquely experiments with several approaches to instilling the fear in us that should prove incompatible, but work together pretty well. Nevertheless, it’s the subtler moments in this issue that are by far the most spine-tingling. The first half of Omnitarium is set on Rathlin Island, 1772, where cult leader and murderer Harrow Moonheart is about to be executed at the gallows before an eager audience. Amongst the spectators is Lord Inquisitor Blutstein, who waits patiently as Moonheart takes four hours to succumb to the noose. As they cut him down, the mystic appears to be still alive, crushing a guards head with his bare hands and enduring all manner of harm until he is finally decapitated by Blutstein.

The story suddenly shifts to London, 1868, where writer Mr White plans to visit the newly constructed Pentansly Gaol for several days. The prison is split into two main sections; an outer court where debtors can slowly earn and pay back their debts, and an inner complex that houses far more dangerous criminals. Here one Doctor Livinsgly “performs his work”. Livingsly’s autopsies on several dead inmates have uncovered something quite peculiar; it would appear that they have all been growing second organs…

With Omnitarium, in particular the scenes set in Victorian London, Jamie Gambell and artist J.C. Grande display an excellent sense of visual narrative. From a remarkable sequence that imitates two characters descending a flight of stairs to several panels that illustrate nothing but uncomfortable silence, like the best comic writers Gambell realises the importance of muted beats between the more macabre moments. His storytelling is often far more sophisticated than many more experienced writers.

Grande previously illustrated the Attackosaur one-off Paralysis, which was a similarly sinister period piece. His work has an energy to it that for the most part makes the book a joy to read, but at times is a little tough to follow. As with the story itself, his black and white art is at its best in the later Victorian London scenes, with the quieter moments in Pentansly Gaol oozing a Lovecraftian atmosphere.

As far as first issues go, Omnitarium #1 more than does its job, deftly throwing the reader a plethora of questions: what part will the death of Moonheart play in the Victorian London plot? Exactly what is Mr White’s agenda? Why oh why are the inmates at Pentansly Gaol growing second body parts? I’m intrigued to see where Gambell is taking this series, and hopeful that the fascinating set-up won’t descend into the usual clichéd horror trappings.

Omnitarium is available from IndyPlanet for $3.50. Alternatively, purchase a pdf of the book at Drive Thru Comics.