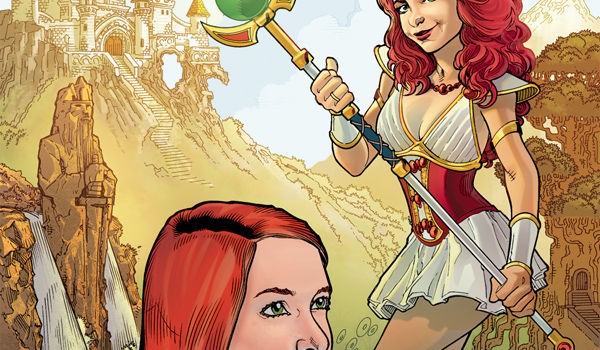 The Guild is one of those cult online shows that I’ve read nothing but praise for, yet despite my best attempts have so far struggled to “get”. Part of this may be down to my newly realised aversion to MMORPGs, but also the fact that outside of the lovely Felicia Day the rest of the cast aren’t exactly convincing. Anyway, I figured that The Guild: The Comic, also written by Day, would feature the humour that has earned the show numerous awards but without the budget constraints and straight-out-of-college acting. This issue acts as an origin story of sorts, detailing Cyd Sherman’s unfulfilled life before she discovered the life-affirming joys of endless grinding and fetch quests, and met her fellow Knights of Good.

The art in this issue is interesting, with Jim Rugg rendering Cyd’s reality and her online initiation in distinctly different art styles. Whereas Cyd’s mundane day-to-day life is drawn in a conventional comic style, the online portions are quite beautifully painted, with the game’s exotic fantasy landscapes frequently disrupted by the player’s dull, dimly lit households. Rugg’s faces are somewhat inconstant, but this may in part be due to Felicia’s natural loveliness; as opposed to the botoxed, Megan Fox clones that Hollywood practically manufactures with glossy posters and comic book covers in mind.

From a newb’s perspective this first issue was an enjoyable and surprisingly light read. The humour wasn’t as sharp as I’d expected, but neither is this series in any way cynical. Whereas many writers would feel the need to bitterly poke fun at The Guild’s subject matter, Felicia Day’s semi-autobiographical of discontented loners finding one another in a virtual realm instead concentrates on MMO gaming’s ability to bring people together. Which is not only kind of nice, but perhaps explains why the series has gathered such a devoted following.