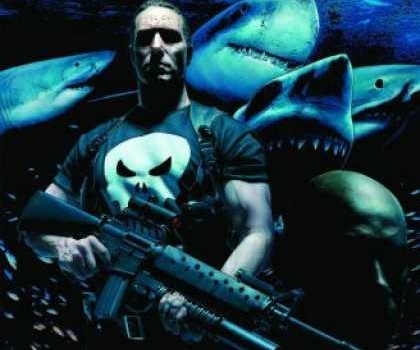 One consequence of Frank Castle’s hardline approach to vigilantism is that his enemies rarely get the opportunity to stage comebacks; usually because he’s deposited several dozen bullets in their skulls. While Garth Ennis may have introduced the Marvel Universe to the mountain of moronic muscle that was the Russian, a sense of repetition has grown heavier with each Punisher MAX story arc. After all, there are only so many indistinguishable Mafioso scumbags Castle can dispose of in increasingly inventive ways. Enter Barracuda, an amoral, animalistic yet deceptively cunning adversary who just about gives the Punisher a run for his money. Much of the fun in this arc is derived from Barracuda’s foul mouthed sense of humour, which proves the perfect antithesis to Castle’s dry narration. Barracuda is the sort of villain you know you shouldn’t like, but Grant Ennis’s polished dialogue makes it difficult not to.

Ennis is wise enough to keep Barracuda’s appearances seldom, instead focusing on a different kind of monster – corporate scumbag CEO Harry Ebbing, and his entourage of bootlickers, backstabbers… and trophy wife Alice, who’s pretty much every possible misogynistic fantasy rolled into one. And while Goran Parlov doesn’t quite capture that demented quirkiness which made Steve Dillon such a perfect partner for Ennis, but he comes damn close.

I’m writing this review four years after this volume came out, and anyone with the slightest interest in the series will know that Barracuda does indeed survive his apparent death at the end of this volume. He even manages what no Punisher villain before him has, headlining his own limited series. But it’ll be this book that fans will mostly remember, not necessarily because it’s one of the best Punisher stories but because in all his thirty-plus years of butchery Frank’s not encountered anyone quite like Barracuda.