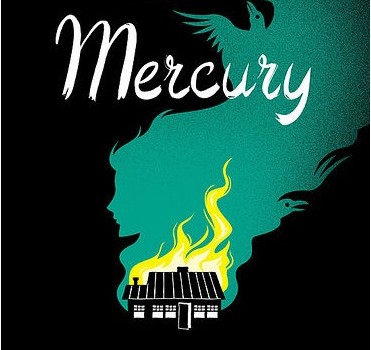 The spiritual successor to Hope Larson’s pleasant teen drama Chiggers (which earned her Eisner Award acclaim), Mercury is a more ambitious narrative of two coming-of-age tales tied by blood but separated by time. In present day Nova Scotia, Tara Fraser is living separate from her mother after their house, which has been in the Fraser family for generations, was recently destroyed in a fire. When Tara discovers a pendant with mysterious dowsing properties, her life begins to draw parallels with that of her ancestor Josey Fraser, whose family was torn apart by conniving prospector Asa Curry some 150 years ago in the very same home.

Tara and Josey are near identical but for their different lengths of hair, and Larson does a fine job blurring the two timelines as history repeats itself in each teenager’s desires for adventure and romance. As with Lise Myhre’s Nemi, Hope Larson gets a brilliant array of facial expressions from her simple character designs. Occasionally, her work even drifts towards Daniel Clowes territory as characters are distorted to revolting proportions, imbuing the nineteenth century scenes in particular with a sinister and ethereal ambiance.

As part of Atheneum’s “books for young readers” range, Mercury sits in an uncomfortable place. Readers of any age or gender will identify with boyish pariah Tara and the rest of the female cast, yet Larson so neatly ties her past and present plotlines into a polite, convenient end that a more aged and cynical reader is likely to feel short-changed. Elements of magical realism, such as a crow with Curry’s face, also work their way into the plot, and feel incongruous to what is an otherwise grounded tale.

But Hope Larson’s subtle characterisation and charming art are enough to make Mercury a pleasurable, breezy read that teenage girls will surely lap up (and that is by no means a criticism), and open-minded adults will also find themselves sucked into.