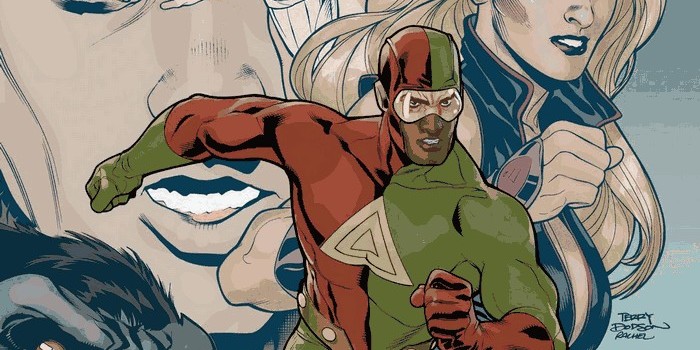 Back in the 90s it was compulsory at Marvel for every new series to guest star either Spider-man or Wolverine, in the hope that kids would grab these comics up just because of a familiar face, only to get hooked on new properties like Darkhawk and Sleepwalker as though they were crack cocaine. Things haven’t changed drastically, and when Jeff Parker’s last Agents of Atlas series failed to garner the audience it deserved, someone at Marvel figured the only way to sell the rebooted series was to make the title just that little bit leaner, and feature a guest appearance by one of their more commercial characters, 3-D Man.

I’m jesting, of course. The modern-day iteration of 3-D Man, Delroy Garrett (formerly Triathlon) is presumably going to soon be joining Jimmy Woo, Ken Hale and company. Interestingly, the preposterous red/green crime fighter was part of the “50s Avengers” line-up that constituted the team’s first appearance in an old issue of What If?

Despite having played a crucial role in Secret Invasion (his powers allowed him to see Skrulls in their true form) Garrett is now a washed up has-been, and is being pressurised by his superficial girlfriend into taking a spot on a Big Brother style reality TV show. But when several possessed bystanders attempt to kill him, Garrett suspects that the recently vilified Agents of Atlas, who he’s been having unaccountable visions of, must be behind it.

This wasn’t the most gripping or dynamic of first issues. For one, it didn’t even feature the central team but for a few panels. But I respect Jeff Parker’s approach here; by introducing us to the world of Atlas through Garrett’s eyes, he both laid the premise out for new readers, while insuring that this introduction wasn’t in any way a retread of the last one.

There’s also a secondary tale, ‘Department Zero,’ which sees the Agents in the 1950s, battling the undead. Intriguingly, these events are briefly depicted in 3-D Man’s dreams. Don’t be surprised if Parker ties the two plotlines together at a later point, as he did previously with the Wolverine flashback supplement.

Gabriel Hardman also returns to bring a familiar touch to the characters, with Ramon Rosanas offering a completely different take on the crew for the precedent story. In every way possible ‘The Return of the Three Dimensional Man’ is Agents of Atlas continuing as normal, which is by no means a bad thing. Other than to drag the struggling title under the Heroic Age banner, I can’t see any reason why Marvel cancelled the last series.