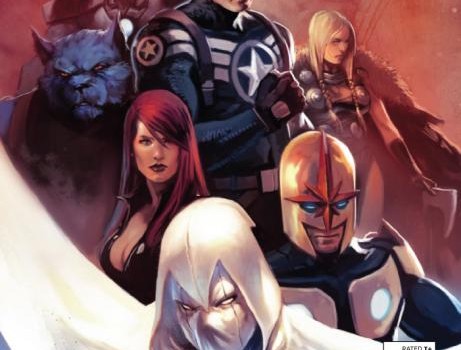 If you’ve been in a coma for the past five years and are wondering what the ugly Heroic Age banner is all about, it’s simply Marvel’s way of saying “here we go all over again!” with another batch of new titles and super-team configurations that will hopefully appeal to true believers and newcomers alike. Alongside a return to the classic Avengers line-up and a New Avengers reboot we have Ed Brubaker’s Secret Avengers, an espionage-flavoured title promising a return to Steranko-styled spy shenanigans. Headed up by Steve “I thought you were dead” Rogers, and featuring such series-sellers as Moon Knight and Nova, the Secret Avengers are essentially a knee-jerk reaction to Norman Osborn’s time in power; a coverts ops unit that will thwart evildoers and prevent cosmic disasters before they become… well, another Dark Reign. The rest of the team is comprised of fan favourites who’ve generally been unable to sustain their own series: Black Widow, War Machine, Valkyrie of the Defenders, a newly redeemable Ant-Man and former Avenger Beast.

With Secret Avengers Brubaker appears to be aiming for a faster pace and cheesier tone than he displayed in his celebrated runs on Captain America, Daredevil and Iron Fist. This series clearly aims to offer imaginative sci-fi pulp, and Brubaker successfully evokes Marvel’s cosmic storylines of the 70s and 80s. Bar a scenes detailing each members recruitment, there’s little time spent assembling the familiar roster. Instead, the plot, which sees the team for head for Mars after acquiring a counterfeit (but presumably no less powerful) Serpent Crown, fundamentally acts as a role call.

As for the team itself, the standout member so far has to be Eric O’Grady’s now official Ant-Man. His stint in the Thunderbolts was clearly an eye-opener, and Steve Rogers’ “you have a chance to be a man” speech worked so well.  There’s the sense that Rogers has given many of these antiheroes positions in the team out of some altruistic duty, and while Moon Knight and War Machine aren’t given much to do this issue, they should offer an interesting contrast to the likes of Sharon Carter and Beast. The only questionable member has to be Nova, who really doesn’t need to be working for Cap after defending the universe in the recent galactic events.

Mike Deodato’s art has a suitably gritty tone to it, and is far more consistent than his work on Dark Avengers. But his heavy inking does prove a distraction at times, and jars with the Heroic Age’s simpler, brighter outlook. And the costume designs could really have done with a series-specific redesign. Steve Roger’s new take on the stars ‘n’ stripes isn’t exactly cut out for espionage, and the concept of the team working from the shadows kind of falls apart when he’s just hired Moon Knight and War Machine. Ant-Man’s new costume is perhaps a little too Jacky Kirby for its own good, and Beast’s new A-emblem leotard is frankly ridiculous.

Starting a new series with a new roster is never easy, but while ‘Secret Histories part 1’ was an enjoyable enough romp the Mars-based antics and an absence of Brubaker’s softer character-driven moments prevented this debut from truly grabbing my interest. Right now the series doesn’t seem to know what it wants to be about; a clandestine assembly of super spies or the Cosmic Defenders? Once Brubaker makes up his mind Secret Avengers has the potential to be a lot of fun.