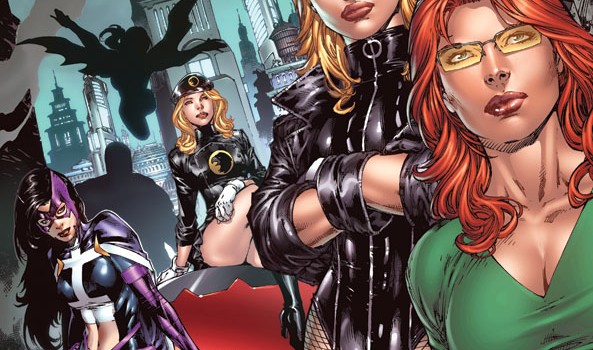 With the last Birds of Prey series getting cancelled just over a year ago, you’d be forgiven for thinking that DC’s reboot would take Oracle, Huntress, Black Canary and company in a new direction. But no: essentially, part 1 of ‘Endrun’ is business as usual for the Birds. Gail Simone returns to the team following her riveting work on Secret Six, and bar a few new recruits it’s almost as if Gotham’s girls never left us. This issue kicks off with Black Canary taking down some thinly defined kidnappers in Iceland, after which Simone commendably drags the team back together in just a few pages. Barbara has received several dozen files containing data on costumed heroes and villains, alongside the promise that one of the individuals mentioned within will die on the hour, every hour. The sender is also threatening to make every file public unless the Birds play along. The set-up may riff shamelessly on the Saw movies, but it’s an extremely effective way of getting the girls back together in a single issue.

This debut also sees the inclusion of Hawk and Dove into the roster. It’s a pretty tenuous link to the Brightest Day event, and a scene where Hawk verges on killing a scumbag practically mimics a moment from that series, but hopefully Simone will find a better use for the avian duo than anyone else has been able to. I’m also not entirely convinced that psycho-Hawk really has a place in the team; though a bloke he may be, I suppose he at least fits in thematically.

Ed Benes also returns to the series, and pretty much nails it as he did before. His heroines are sexy but somehow remain tasteful in their kinky fetish gear… er, arguably. That said, the Iceland scene sees cold-weather alternate costumes for Black Canary and Lady Blackhawke, and it’s a lot easier to take these girls more seriously when they’re not dressed like bondage models.

This new series of Birds of Prey probably isn’t going to convert anyone, but if you liked the last series then you’ll more than likely enjoy this. Simone and Benes are a great combo, and the issue ends on the sort of brilliantly naff cliff-hanger we just don’t get enough of anymore. At the end of the day, there’s not much more to say.