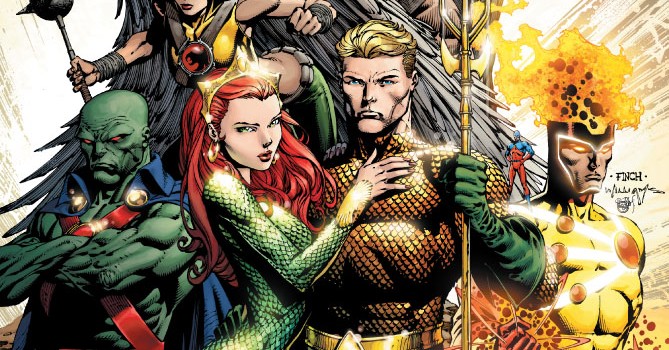 It think it’s safe to say that Brightest Day #0’s memorable opening – which for those that didn’t read it, featured a newborn chick falling from its nest and being brought back to life by Deadman – has pretty much encapsulated the event so far. Tomasi’s presence has ensured that Brightest Day has been well executed, but like Aquaman’s zombie killer whale buddy, this series is already looking a little gutless. But that’s the problem with bringing back dead superheroes, isn’t it? You habitually curse DC for killing off Hal Jordan, but only after he’s been reinstated into the ranks of the living do you realise how much you liked Kyle Rayner. This perhaps explains why Brightest Day doesn’t feel as involving as it should; it’s difficult to muster any sense of menace or jeopardy when the book’s central characters have all recently (and conveniently) returned from the dead.

Fortunately, Brightest Day’s pace ensures that it’s never anything less than entertaining, and despite there essentially being five art teams involved the visuals are impressively unified. Johns and Tomasi have done a great job of maintaining the momentum so far; there’s currently so much going on that the elements that work bolster up those that aren’t. Aquaman’s perverted powers and Martian Manhunter’s murder inquiry are definitely the highlights, but Deadman’s encounter with the Anti-monitor and a glimpse of just what Hath-Set plans for Hawkman/Hawkgirl’s ancestors’ remains are also intriguing enough. Only the plodding Firestorm plot has failed to pique my interest in any way.

It’s also fun to see characters such as Boston Brand getting to play with the big boys. Ever since 52, DC’s crossover events have found a nice balance between recognisable icons, B-listers and fan favourites, and while the title presently lacks a more quirky creation such as Animal Man or a Zatanna, we do have Maxwell Lord and Professor Zoom to look forward to.

The fact that I’m both clueless as to where Brightest Day is heading and interested enough to stay along for the ride already puts this series above Blackest Night or Countdown. It’s probably going to be a few months before the various plot begin to converge, and this series’ success will really depend on whether or not Johns and Tomasi can unite them in a more satisfying way than DC’s last few events.