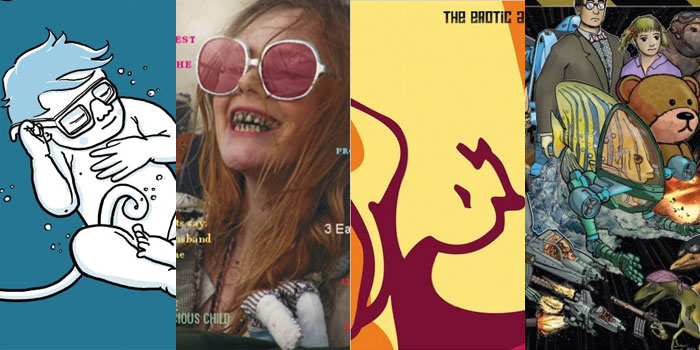 A mere eleven months later, I’m back with my “regular” look at the finest, strangest, funniest or just darned unique-est creator owned comics to have entered my radar. Over the next few weeks I’ll hopefully be catching up with some of the titles I’ve received over 2015.

Dennis Wojda’s email for 566 Frames began with “I have not made a comic about zombies but a graphic novel about a baby in glasses,” and I immediately knew that I was going to adore his heart-warming yet ambitious graphic memoir. Stockholm-born but Poland-based writer/illustrator Wojda has been awarded the Grand Prix twice at the Polish International Festival of Comics, and this book is a breathtaking journey through the lives and stories leading to his conception across, as the title suggests, five hundred and sixty-six panels. Laced with equal doses of wit and tragedy, 566 Frames is a kaleidoscopic narrative that often verges on magical realism, and takes the reader from Imperial Russia through nazi-occupied Warsaw to 60s Stockholm. Wojda reveals the lives of his parents and superstitious grandparents in the form of snapshots, a story formed from incidents, anecdotes, conjectures… and those small snippets of past life that somehow come together to make us who we are.

566 Frames is published in the UK by Borderline Press and available at www.borderline-press.com.

Next up is this bizarre and idiosyncratic photonovel, described by creator Stavit Allweis as “a campy post-apocalyptic story in the format of a retro magazine.” It’s an eclectic project that feels like a compilation of different magazines discovered in a time capsule from an alternate 60s America, and is an attempt from its creator to redeem the photonovel format, which to my knowledge (I’m probably wrong) has seldom been used in anything beyond naff film adaptations or funny cartoon strips.

The series has expanded to 8 volumes now, which Allweis believes makes it possibly the largest photonovel project undertaken.

Volume 1 is free to read at yumpu.com, though if you’re too lazy to click on the link, I’ve embedded it below: Maybury’s approach to visual storytelling is a fascinating one, in that his illustrations and character designs are purposely lacking in detail, instead relying on the reader’s imagination to fill in the gaps.

This new collected edition by Soaring Penguin Press features crisper art than the self-published copy I bought from the artist many years ago, and Maybury deserves much respect for sticking with a style and concept so ludicrous and unconventional.

This oddity is from Jimmy Pearson and Brian ‘Clank’ Bennett, and is an “all-ages anthropomorphic space opera” that features sentient Earth animals battling an intergalactic war against the evil rat empire. Why are rats always the bad guys? It’s a strange concoction to be sure, and while the story is the usual space opera guff (aimed at a younger audience, to be fair), the main attraction for me were Bennett ‘s wonderfully strange space ships, vehicles and weaponry. Ever wondered how a fish could pilot a star fighter? This book is for you.

Cogs & Claws is available digitally and in print from Markosia.