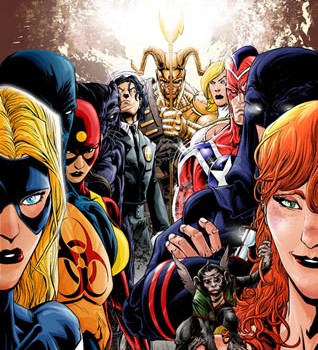 Matt Sturges and Bill Willingham’s recent ‘The Bad Seed’ arc in Justice Society of America, ended with the destruction of the Brownstone and the downcast team’s decision to split in two. Much like the JSA itself, the All-Stars line-up consists of both the youngest members and several more seasoned heroes such as Hourman and Power Girl. Anyone who has watched the JSA title steadily slip into a creative black hole over the past few years will be hopeful that this new direction for the team will result in at least one good series out of the two. If the first issue of JSA All-Stars is any indication, this won’t be it. Sturges makes the team roster work well, exploiting the hostilities between certain members, particularly Magog and, well… everybody else, to good effect. But the team’s first conflict with an army of ruthless Russkie communist androids, would have been embarrassing two decades ago. Now it’s quite pathetic, and not played with a hint of irony.

Another point of contention is the art, in particular the use of Power Girl and her, ahem, assets. Freddie Williams II draws PG’s tips (yes, that was truly woeful) the same size as her head, and manages to squeeze them into every page possible. Add to this the fact that Kara has her outfit blasted to bits not once but twice in this issue alone and you have a book that celebrates the sort of sleaze the industry has slowly moved on from.

There are moments of promise in this first issue. The training scenes were fun, and the brief appearance from the new Sandman was far more intriguing than either of the pointless large-scale battles. The long anticipated reveal of the mysterious villain with a fixation for Stargirl was also handled well enough to convince me that while JSA All-Stars probably will never be great, it has the capacity to improve.