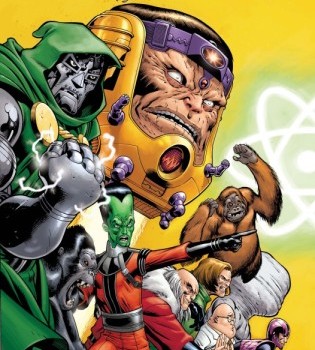 Fall of the Hulks: Alpha Review

Like the green goliath himself, the Hulk series and its offshoots have grown out of control, and currently exist in a state of flux that nobody seems able to fix. Fortunately, Jeff Parker, whose immensely enjoyable Agents of ATLAS has been a definite high point of the year, is in charge of gluing the Hulkverse back together.

This one-shot prologue focuses on Hulk’s nemesis the Leader, and his gathering of able-minded villains known as the Intelligencia. The Mad Thinker, Egghead, the Wizard and the Red Ghost might all be B-listers, but together their quest for knowledge and power makes for a fascinating odyssey, set across many years of comic continuity. Paul Pelletier clearly revels in the depiction of several classic Marvel moments, and the gradual growth of the Leader’s green cranium adds a strong sense of time to this special.

Whether or not the ‘World War Hulks’ event in 2010 will live up to the promise of Fall of the Hulks: Alpha is yet to be seen, but by presenting the story from the perspective of Hulk’s antagonists, Parker has forged an excellent foreword that not only sheds valuable light on the Red Hulk, but reads well on its own.