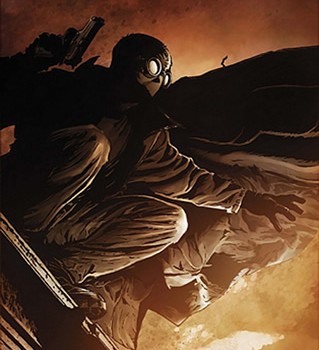 Does anyone still care for the Marvel Noir range? Marvel clearly thinks so, with this Spider-man follow-up out this week and another X-men miniseries released next week. While the various titles have all maintained a consistent level of quality, this sequel suffers somewhat as many of this depression-era Spidey’s villains were killed in the previous series. Spider-man Noir: Eyes Without a Face #1

Enter rogue replacements the Sandman and Doctor Otto Octavius, then. The former is a viscous mob henchman with a penchant for crushing skulls, the latter a wheelchair-bound scientist willing to perform heinous operations on apes and humans to find a cure for his condition. There’s also a mysterious masked crime boss filling the deceased Goblin’s shoes.

Carmine Di Giandomenico’s art has both a European stylings and an animated aesthetic reminiscent of Peter Chung’s Aeon Flux. But while this book looks great it doesn’t quite evoke 30s Manhattan, with the depicted fashions (Black Cat’s undies in particular) looking far too modern.

Nevertheless, Eyes Without a Face is a decent read, and while Hine and Sapolsky’s plot is fairly pedestrian, they’ve scripted an interesting enough first issue that anyone intrigued by the Marvel Noir premise will probably want to stick with.