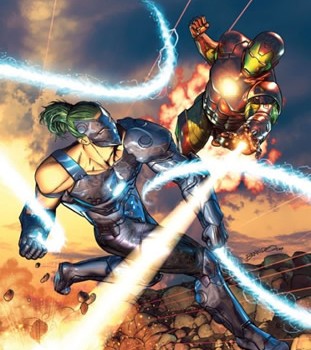 Okay, let’s not beat around the bush: Iron Man vs. Whiplash is a shameless cash-in on the impending Iron Man movie sequel. There’s no reason for this plot existing outside of the regular series, other than Marvel seeing an opportunity to cram another title onto the shelves.

As Tony Stark sits before an international criminal court, via several flashbacks we visit the decimation of a small Russian village by what is clearly the Iron Man suit – provoking an all-new, all-vengeful version of Whiplash. Of course, we know Stark isn’t in any way guilty, so the present day frame-story in this issue is ultimately pointles

There’s something decidedly shoddy about this series. At one point the Red Guardian recounts the apprehension of Stark, yet in this same scene Guggenheim and Braga also illustrate Stark pondering his Facebook status via a several thought bubbles. Simply put, Iron Man vs. Whiplash is uninspired drivel, and anyone wanting an entry point into the Iron Man comics should instead jump into the currently superb regular series or any number of classic trades.