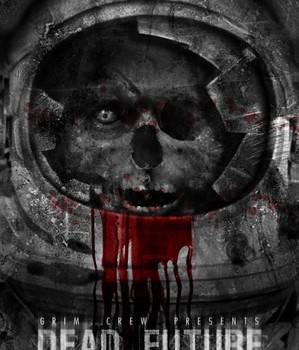 Grim Crew began several years ago with Martin Brandt’s collaborative project Grim Furry Tales, a charming collection of linked fairy tales, journal extracts and prose stories all written by Brandt and illustrated from artists around the world. Whereas that book celebrated the preciousness of childhood fantasy, Grim Crew’s new series Dead Future is an anthology with a far less optimistic outlook. The theme running throughout Dead Future is that of the walking dead, zombies if you like, with the various writers and artists – many retuning from Grim Furry Tales – determinedly pushing for new angles from which to narrate the fall of man to the undead. I was sent the first two issues of Dead Future simultaneously (each containing three tales) and will review them as one.

Issue 1 begins with by far the best story of the six. Real Monsters, written by Brandt and beautifully illustrated by Paul Petyo, tells of a woman surviving beyond the zombie apocalypse by following a series of simple rules that prevent her from disturbing the undead from their day-to-day business. While the idea of a list of ‘Rules for Survival’ has been done many times before (Zombieland most recently), Real Monsters has a genuinely unexpected twist that reveals what just you’ve just been reading in an entirely different light. Petyo’s combination of photographed actors and digital paintings evoke Dave McKean’s very best; expect to see him hitting the mainstream any time soon.

Brandt’s second story, Major Tom, is a neat sci-fi piece set on a space station orbiting Earth. Low on supplies, the crew are forced to wait for help as communications with Mission Control suddenly cease and the supply shuttle is evidently not on its way. With art by Martino Abreu, this is another neat little tale that views the end of the world from afar, with allusions to both the David Bowie song of the title and 2001: A Space Odyssey.

Finishing off the first issue is Non Mortuus, which depicts more of a dead past than a future, as those lovable corpses infect 15th century Rome. Maceda Alves writes and illustrates this account of cruel Pope (is there any other kind?) Innocent VIII’s devastating quest for immortality. Though Alves tries to cram a little too much into so few pages, the final page makes this gruesome piece more than worthwhile.

Issue 2 begins not with a bang but with With a Whimper, as Sebastian Piccione and Martino Abreu bring us another account of the end of the world. Amusing, here the zombies overthrew their living cousins very slowly, as civilisation spent its final days arguing as to whether or not the undead deserved civil rights than preventing the infestation.

Candy Hart’s Kindergarten Zombies is a far more light-hearted contribution, as a group of school kids battle undead classmates and teachers. Finally, The Rest of the Story by Daniel Palmer and Juha Veltti is more intimate look at one family’s last stand.

While these anthologies can be read as standalones, I’d definitely recommend Issue 1 over 2. Real Monsters is by far the most effective story in this collection, and both Major Tom and Non Mortuus have far more captivating hooks than the tales in #2. But then I suppose reviewing these shorts on an individual basis is against the spirit of the anthology; half the fun is delving in and discovering something you like for yourself.

While many of the talent involved with Dead Future are clearly starting out, overall the series still packs more than enough ideas and novel twists on the genre that zombie fans will find more than enough to enjoy.

Both issues of Dead Future are available from Drive Thru Comics, and are available at the heavily discounted price of $0.89 (!) until the new year. Normal price is $3.99. For more information visit www.grimcrew.com.

One thought on “Grim Crew Presents: Dead Future #1 and #2 Review”