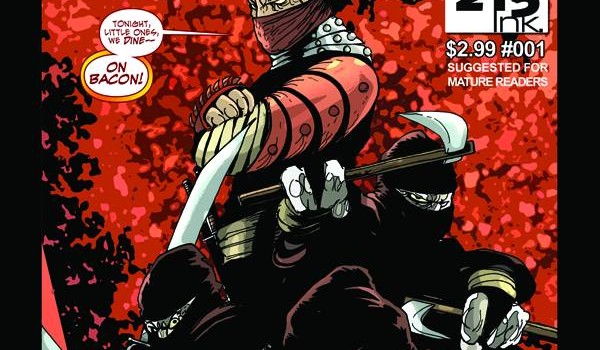 I went into Massive Awesome with no clue as to what it was about. 215 Ink should be commended on this first issue’s standard edition cover, which depicts a group of monstrous ninjas, for not revealing the series’ two, er, unique protagonists. You see, Massive Awesome stars a zombie pickle and a Commando bacon rasher in a bandana.

Well… technically, Pickle isn’t actually a zombie but merely thinks he’s one, and Bacon has been retired from service, after breaking the depraved Pickle out of jail in the issue’s opening. The silly concept wouldn’t be quite so darn weird were it not for the fact that every other character in Massive Awesome is human. While they all recognise that Pickle and Bacon are 6 foot tall talking edibles, not one person questions it. According to legend (or the inner sleeve), Stephen Lindsay doodled the characters one day to entertain his kids; they found them so hilarious that he decided to work the incompatible duo into a regular series. There’s something to be said for having the backbone to venture on with an idea that nobody else in their right mind would even consider, and I’m truly glad he did.

As with any concept this “out there,” there’s going to be a point where Massive Awesome’s novelty wears off, and the series has to prove that it’s not a one note joke. Lindsay hasn’t quite done that yet, but as it stands this debut was a lot of fun. It helps that artist Rolf Lejdegård is clearly in on the joke; the book’s kinetic visuals and snappy pace (it takes less than 10 minutes to read) evoke the stern machismo of 90s Image, but in a self-derivative enough manner to get away with it. The issue also contains a brief episode from Linday’s other series, Jesus Hates Zombies, in which the son of Christ has returned to kick undead ass. It’s a similarly wacky affair, but if anything it made me appreciate Massive Awesome’s tastetacular twosome even more.

Silly nonsense Massive Awesome may be – if you were expecting anything less, you probably picked up the wrong book – but its undeniably well-executed nonsense. Stephen Lindsay’s script raises more than enough chuckles, and by the end of this issue part of my brain had almost bypassed quite how absurd the premise was. Which is in itself both a pretty awesome feat, and really quite terrifying.