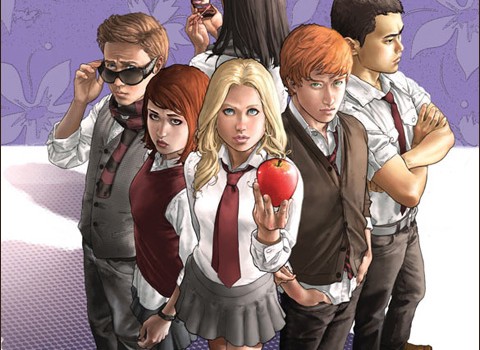 Nick Spencer’s hit new series Morning Glories is further proof that everybody loves good mystery. While the series (presumably) borrows elements from Susperia, The Faculty and a thousand other high school dramas, Spencer (Existence 2.0, Forgetless) has smartly abstained from revealing precisely what his new series is about.

Image has wisely pushed this series onto the shelves with a 44 page debut (subsequent issues will be 32 pages each), allowing Spencer ample space to introduce his cast of misfits and madams as well as the sinister Morning Glory Academy. As is practically obligatory, each principal character represents a separate colour on the stereotype spectrum. Casey is mollycoddled middle-class, Ike the amoral toff, Zoe’s a manipulative slut, Hunter is the neglected loser, and Zoe is the introspective emo. Only the stoic Fukayama Jun has yet to be assigned a label. Each student comes from an entirely different background, and each has been accepted into Morning Glory for a different reason. Seemingly, the only thing they have in common is the same birthday. Joe Eisner’s minimalistic art style fits the series’ teenage shenanigans to a tee – though his lines occasionally suffer from inconsistent width – as do Alex Sollazzo’s lively colours. The extended page count has also given Spencer and Eisner the opportunity to work on some pretty inventive panel compositions that might have been sacrificed were this debut reduced in scale.

It’s this eclectic and ethnically diverse cast that has perhaps encouraged Image to fervently promote Morning Glories as “Runaways meets Lost.” While the Runaways comparison is justified, I feel that Morning Glories has already given too much away to warrant the Lost connection. It’s tempting to forget that when Lost first debuted, few viewers suspected a science fiction/fantasy show, instead tuning in for a modern update of Gilligan’s Island. So far Nick Spencer has not managed to summon such a level of mystery. Emphasis on the “so far”…

And just as Lost fumbled its revelations, I’m already a little worried that Morning Glories’ more outlandish elements (brainwashed students, a soul-sucking spirit, a secret torture dungeon, those freaky concurrent birthdays) aren’t going to lead to anything quite as interesting as the central characters are already proving to be. But this is still an interesting first issue with tons of potential, and proves surprisingly inventive despite the familiar setting.