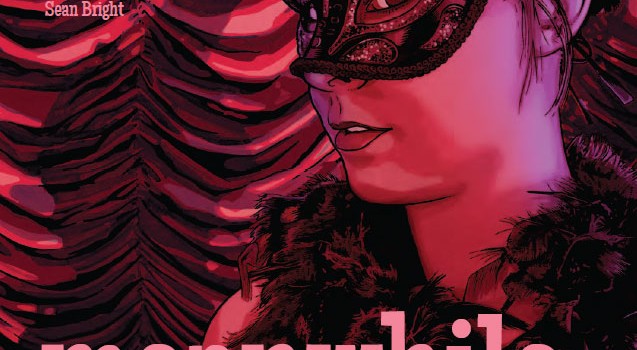 Those of a certain age – at least those of a certain age who ventured beyond Marvel, DC and Image – might remember Gary Spencer Millidge’s Strangehaven, an indie series that came about in a time before tablets and digital readers made self-published comics a relatively cheap prospect. A beautifully illustrated and immaculately paced supernatural mystery, one which refreshingly kept the fantastical elements to a minimum (think a very, very English Twin Peaks), Strangehaven ran from 1995 to 2005, steadily building a foundation of passionate readers. But then, three volumes in… it just stopped, presumably because Millidge was understandably unable to maintain such an expensive and time-consuming labour of love. Critical acclaim and award nominations don’t pay bills.

As he writes in the foreword of the first issue of Soaring Penguin Press’s fine new anthology Meanwhile…, editor John Anderson proposed that Millidge split up the series into more manageable twelve-to-sixteen page portions, to be published on a bimonthly basis (and eventually form the final fourth volume, Strangehaven: Destiny). I’d feared that the prevalence of indie comics during Strangehaven‘s decade-long hiatus would have taken away from its distinctiveness, but no, it’s still a standout series, and I hope that Milledge will continue his beautifully delicate approach to storytelling long after its conclusion. This issue’s segment commences with a “previously on…” of sorts, for those who haven’t read the books in some time, and pretty much resumes where it left off, only now in full colour.

So yes, Meanwhile… is essentially a way to resurrect a beloved and incomplete British cult series, but the other strips within this 2000AD-style publication are more than just supporting acts. The Bad, Bad Place, a colourful and demented comedy horror by David Hine and Mark Stafford, is great fun, and packs a powerful hook in its ten pages. Chris Geary’s Melody Baker reads like a rediscovered seventies artefact (and that’s in no way a bad thing), Sally Jane Thompson’s Heavy is a fantastic wordless short, and while Yuko Rabbit’s 10 Minutes didn’t quite offer enough meat for me to form an opinion on it yet, the final page reveals much potential. This issue also features the three winners of the British Library’s recent ‘Comics Unmasked’ exhibition competition. All are superb and together illustrate the full range of the medium.

You couldn’t ask for a more diverse range of strips, and it’s this eccentricity that gives Meanwhile… a unique place on the shelf. I really hope that Soaring Penguin Press have success with what is a tantalising prospect, one which not only looks to the past, giving an incomplete opus the finale it deserves, but to the future of independent comic talent and unconventional storytelling.