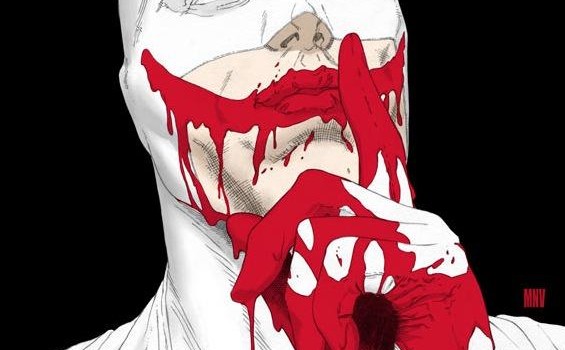 If the first issue of Mark Millar’s latest overhyped project provoked any level of thought from me it was this: Nemesis, the ghost-like villainous lead of this new series, is a complete and utter prick. And yes, I do appreciate that he’s supposed to be the bad guy (the series seems to have been build entirely on the “what if Batman became the Joker?” premise) but currently nothing could make me want to invest in the character. Ra’s Al Ghul is a villain whose goals you can appreciate, even if his methods are fanatical. Doctor Doom, Sinestro and Thanos are all worthy of a little respect. From this first issue alone, the only thing we know about Nemesis is that he’s an ostentatious asshole who kills innocents for a laugh.

Nemesis’s foil comes in the form of Commissioner Gordon analogue, Chief of Police Morrow. It turns out that Nemesis is essentially a high-tech serial killer with a unique modus operandi; he travels from city to city, selecting one decorated cop who he then toys with, daring his prey to stop him from killing civilians in the sort of inventive ways that distinguish a common criminal or murderer from a supervillain. After causing mayhem in Tokyo, Nemeses heads to America, kidnapping the president along the way, with Morrow in mind as his new pet project.

Regular Millar collaborator Steve McNiven (Old Man Logan, Civil War) definitely delivers in places but his art is ultimately let down by some truly bland character designs. Nemesis must have one of the most unmemorable costumes ever created (it’s white and, erm, white), and it’s difficult to believe that Morrow is going to become more interesting as the series progresses.

Nemesis has potential, but so far this series has done nothing to prove itself. Millar may have conceived the series as a big dumb blockbuster of a comic book, and that would be fine if this issue was in any way fun or creative. Instead, Millar has simply turned Gotham’s finest upside down, and that really shouldn’t be enough to get anyone excited.