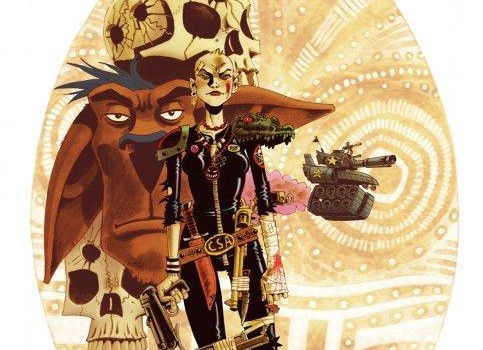 Tank Girl is virtually synonymous with the British comic movement of the 90s, even if the disastrous movie (which introduced Naomi Watts to the world) failed to make the character more than a cult icon and frequenter of T-shirts. Crude, irreverent and psychedelic, the comic itself was an anarchic bit of post-apocalyptic fun, big on attitude and style if not much else. The series also acted as the punky predecessor of sorts to artist Jamie Hewlitt’s animated band Gorillaz, and Hewlitt has once again declined to return for this “all-new all-different” 4-part series from  IDW. Co-creator Alan Martin is back, as is Rufus Dayglo, who has illustrated numerous Tank Girl titles in the past.

Despite that “all-new” it’s promise pretty much business as usual for Tank Girl, Jet Girl and company, with the profanities restored and the series’ trademark disregard for a conventional narrative kept intact. What there is of a plot resolves around the team trying to recover Jet Girl’s golden egg after she is wounded. Alan Martin throws the C-word about like it was going out of fashion, while Dayglo abandons the traditional panel layout for something that resembles a series of napkins covered in the scribbles of a highly creative madman.

Sadly, I couldn’t help but feel that what once made Tank Girl feel so fresh and brilliantly juvenile has passed it’s sell by date. The humour is crude rather than sharp and while the characters are certainly wacky they’re not interesting or deep enough to carry a series on this long. Or maybe I’ve just become a fussy, bitter bastard…

Tank Girl was and has always been – and I’m struggling not to use the tired old Marmite analogy – the sort of comic book that fills a narrow niche. You’ll already have a good enough idea whether or not ‘The Royal Escape’ is for you. But if you’ve yet to experience Martin’s psychotic madam this probably isn’t the best starting point, and a collection of the original episodes that were first printed in Deadline Magazine is easy enough to obtain.