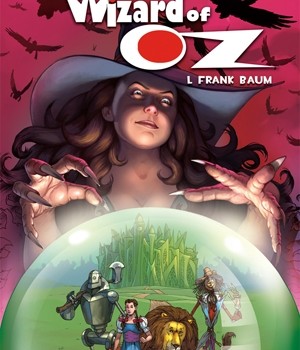 L Frank Baum’s Oz books are perhaps most remembered (in Britain at least) via the 1939 film The Wizard of Oz, a family favourite that has become so deeply ingrained in our culture that it’s hard to think of any other version of Baum’s classic. It’s easy to understand why Marvel made a clear effort to produce something as aesthetically removed from the film as possibly when recently translating the book into a comic. The Wonderful Wizard of Oz - Campfire

New Delhi publisher Campfire’s graphic novel edition sits somewhere in the middle. Visually it’s reminiscent of the film, but Roland Mann’s script remains completely faithful to the source, including less recognisable characters and creatures such as the bizarre Hammerheads. Each of the three followers Dorothy acquires also recount their back-stories in considerable detail, with the Tin Man’s tragic account proving surprising macabre.

Likewise, the character designs by Kevin Jones sit somewhere between the movie and the original illustrations by W.W. Denslow. The Tin Man has undergone an Iron Giant makeover, the Lion is once more a savage four-legged beast, and overall Jones has done a great job of balancing the familiar with the new. Debu Payen’s unnaturally vivid landscapes also empathise that Dorothy is no longer in Kansas. One particular touch I appreciated about this adaptation is that Dorothy looks like a young girl rather than a teen, and Jones doesn’t attempt to sexualise her or fetishise her in any way, as other less scrupulous artists (and publishers) have.

I recently reviewed Campfire’s The Strange Case of Jeyll and Hyde, and while that book could easily be enjoyed by younger readers, teens and adults alike, this adaptation is definitely orientated towards the younger bookworm. Despite the many political allusions that scholars meaninglessly search for in Baum’s work, when taken at face the story is simply escapism of the purest form. It’s an innocent fantasy, a children’s road movie where the friends Dorothy makes are as one-dimensional as they are colourful.

But the simplicity of Baum’s tale is arguably what makes it so delightful.  The Wonderful Wizard of Oz is a splendid book for kids, and Baum’s original work was so well suited to the comic medium that nothing is lost in this iteration. Over a hundred years on Dorothy’s first excursion to the Land of Oz has lost none of its charm.

One thought on “The Wonderful Wizard of Oz Graphic Novel Review”