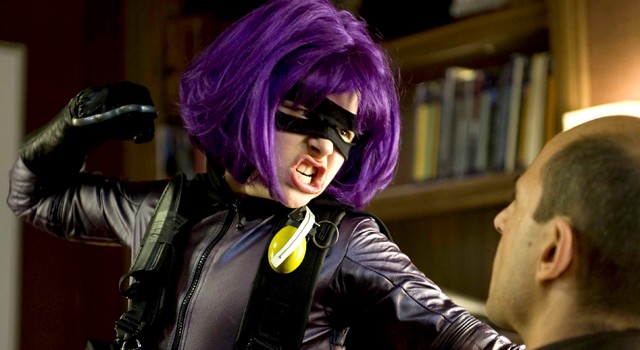 While recent Box Office successes such as Wanted and Iron Man 2 have proved that the superhero movie is here to stay, the genre itself is arguably becoming stagnant and increasingly formula driven. Thank [expletive] for Kick-Ass, a bold, foul-mouthed adaptation of Mark Millar and John Romita Jr.’s miniseries that was shoved into the spotlight when it became the first comic movie to go into production at the same time as the series it was based on.

Consequently, the comic/graphic novel met with unattainable expectations while Matthew Vaughan’s movie took (a small portion of) the world by surprise. Unfortunately, much of the initial attention it received was in the form of controversy surrounding Chloë Moretz and the “C-Word” – though far fewer people seemed concerned that her character Hit-Girl kills several dozen men. Hopefully, now that the fuss has died down, through repeat viewing genre fans can appreciate the film for what it is. For while Kick-Ass may be a guilty pleasure, it’s also a smart, witty and relevant film which affectionately plays on every comic geek’s fantasy of becoming a superhero. As they demonstrated with Stardust, Matthew Vaughan and Jane Goldman know how to keep a movie rolling on snappy dialogue and small but inventive set pieces alone, and the film’s sheer gusto saves it from the Mystery Men comparisons that have plagued similar superhero pastiches.

Brit Aaron Johnson is endearing as Dave Lizewski/Kick-Ass, the ineffectual crime-fighter who fails to appreciate why nobody has attempted costumed vigilance before, but it’s the supporting cast who are most memorable. Nicholas Cage, whose reputation has plummeted with such big budget dross as The Wicker Man and Knowing, summons the spirit of Adam West to hilarious effect as the Batman-lite Big Daddy. And yes, Chloë Moretz does indeed steal the show as the diminutive killer Hit-Girl. The ever-brilliant Mark Strong also deserves praise for adding an additional dimension to mob boss Frank D’Amico, who could have so easily been a bland stereotype (as he was in the comic).

In relation to the source material, Kick-Ass is also one of the most faithful adaptations ever brought to the big screen, with much of the first two acts virtually taken from the panel verbatim. The last thirty minutes, however, branch out from the comic in several ways; most noticeably Big Daddy’s omitted revelation and a funnier, more ambitious finale. If Kick-Ass gets a sequel it will be interesting to see how it breaks away from the comic book follow-up.

True, things do get a little silly by the end of Kick-Ass, and the movie does unfortunately jettison its brains in favour of superhuman feats and precisely the sort of comic book clichés that its first half so refreshingly turned on their head. But it’s a fun, clever labour of love that manages to be part action movie, part teen comedy and an affectionate tribute to all that makes the superhero simultaneously awe-inspiring and utterly ridiculous.