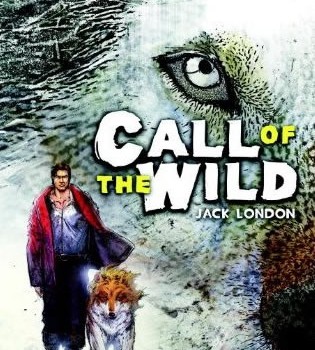 I still remember with absolute clarity the mocking laughter of my fellow pupils when I burst into tears during a primary school reading of The Call of the Wild. You see, Curly the gentle Newfoundland (kind of the dog equivalent of Lord of the Flies’ Simon) had just been torn to shreds by a pack of Huskies led by the viscous Spitz. Others were probably struggling to hide their tears; I was just too much of an overly sentimental animal lover to do the same. The Call of the Wild Graphic Novel

Retrospective agony aside, The Call of the Wild is a children’s book from another era, a period when littluns were quite content to have their hearts punctured by animal suffering and ill-fated friendships. Jack London’s tale of canine Buck, who is stolen from his comfortable domicile and sold as a sled dog, doesn’t add a Hollywood-thick layer of sugar coating to the way man’s best friend was treated back in the 19th Century. Many dogs are worked to death as Buck survives his hardship to once again value the love of a kind owner and, ultimately, become the leader of a pack of wolves.

This is the third literary adaptation by Indian publisher Campfire I’ve reviewed, and overall I’ve been impressed. Several years ago I probably would have refused to review the books, being something of a literary purist, but having seen how the younger members of my family are reluctant to pick up a prose novel but readily embrace graphic novels, I’ve come to the reasonable conclusion that I’d rather my own children (not that I currently have any; but hey, I’m optimistic) read such comic book iterations of London, Baum, Melville and Dickens than not to read them at all. If nothing else, writing these reviews has made me more open-minded.

The Call of the Wild is, I feel, the least successful of these adaptations. Lloyd S Wagner uses London’s text to narrate the tale, and as this isn’t the sort of shaggy dog story where talking animals quip with one another there’s very little in the way of dialogue. Instead, it’s left to illustrator Sachin Nagar to convey each pooch’s personality, which is almost an impossible task; too realistic an art style would render the dogs expressionless, while a cartoonish approach would contradict the level of cold-hearted animal cruelty depicted. Nagar’s art falls somewhere in the middle, and doesn’t quite suit the novel’s dark tone. Sometimes Buck is a stoic, realistically drawn hound, at other points his face has the expressional range of a Disney toon.

That’s not to say that this particular adaptation is by any means bad, just slightly off. Whereas Campfire’s Wonderful Wizard of Oz adaptation just needed to be colourful, and their Strange Case of Jekyll and Hyde had only a novella to fit into 60 or so pages, London’s harsh tale of survival definitely loses something in translation. Perhaps it’s too ambitious a tale to condense into a slim graphic novel volume, or perhaps the source material itself has lost something over the years. While Jekyll and Hyde is a timeless study of man’s dichotic nature, The Call of the Wild is definitely a novel of its time. But its poignant ending is still sure to have even the hardest of children in tears.

While something is going to be missing in such literature-based comics, it’s remarkable how durable these stories and characters are. Naturally, there’s no substitute for the original text, but Campfire’s books have all proven so faithful to the source that it’s hard to fault the company’s intentions. Their graphic novels are far closer, and more respectful, to the source material than the many film adaptations these literary classics have spawned.

One thought on “The Call of the Wild Graphic Novel Review”