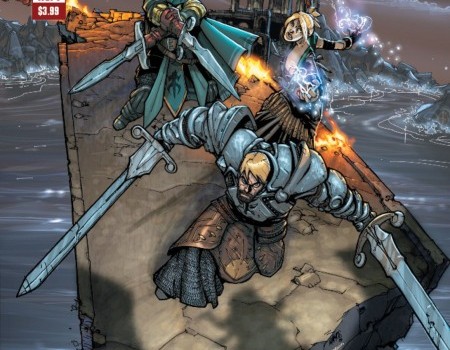 It’s testament to the quality of the writing team at Bioware that Dragon Age: Origins turned out to be one of the most absorbing fantasy RPG universes ever created. From afar Ferelden appeared to be yet another uninspired Middle Earth clone, yet the world Bioware crafted was so brimming with deep mythologies and plausible cultures, religions and races that, like the vast universe Mass Effect before it, Ferelden soon became a world ripe for exploration in other media. Dragon Age: The Comic (unlike the games, this series has no subtitle) takes the grounded, gritty landscape Bioware have developed and throws it aside for a colourful, Joe Madureira-style aesthetic and a plot that would feel more at home on an episode of Legend of the Seeker. It isn’t by any means an unreadable comic, or even a bad one. It’s just not Dragon Age.

The series essentially begins as a tale of star-crossed lovers within the Circle Tower. Juliet/Veness is a trainee mage at the Circle of Magi, while Romeo/Sadatt is a Templar. Magic in the realm of Ferelden is a fickle thing, see, and mages are prone to possession by shape-shifting creatures from the Fade, a metaphysical plane inhabited by spirits both malevolent an benevolent. The Templars are bound to guard the magic-wielders, ever ready to kill them at the slightest sign of deviance.

If you hadn’t played the game already, you might not know this, and after reading Issue 1 of Dragon Age, you probably still wouldn’t. The script by Orson Scott Card and Aaron Johnston simply assumes you know the ins and outs of Dragon Age lore, which would be understandable, had the writers made more of an effort to immerse us humble readers into Ferelden. Gamers are more likely to feel as though they’ve picked up the wrong comic.

Mark Robinson’s art is enjoyable, but like the story his illustrations fail to evoke the Ferelden we are familiar with. The armour worn by the Templar’s doesn’t quite resemble that from the game, while the sole Darkspawn that makes an appearance is different than any of the Hurlocks or Genlocks players have decapitated by the thousands.

Typically, these video game comic reviews end with something along the lines of “only dedicated fans of [insert random game title] will want to check this title out. Other need not apply.” Strangely, Dragon Age is the reverse. It’s not a bad comic, and several unexpected plot developments towards the end of the issue could lead this series in any number of interesting directions, but casual readers are likely to be more forgiving towards it than gamers. Ultimately, Dragon Age fails at its sole prerequisite; to accurately convey the game it’s based on.