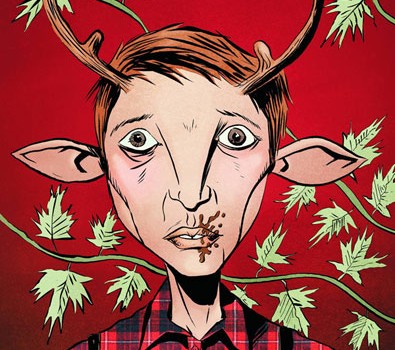 There’s a certain sense of intimacy that comes through whenever an independent comic creator handles both the art and writing duties on a comic. When Eisner-nominated Jeff Lemire (Essex County Trilogy) moved to Vertigo, these indie sensibilities thankfully remained intact in The Nobody, an eerie homage to The Invisible Man. Sweet Tooth is no different; it’s a post-apocalyptic oddity that feels at home beside Vertigo’s best, but still bears the personal touch of an artist whose intention is to tell an enchanting story rather than appeal to the mainstream. Sweet Tooth vol. 1: Out of the Deep Woods

In a near future where much of humankind has fallen to a mysterious illness, bizarre boy/deer hybrid Gus resides in the centre of Nebraska State Wilderness Sanctuary with his protective but ailing father. He’s repeatedly told never to stray too far from their cabin, as Gus’s kind has been hunted to near extinction. But when Gus’s father inevitably passes away, Gus is taken from his serene habitat by drifter Tommy Jepperd, whose intentions are ambiguous until the final few pages of ‘Out of the Deep Woods.’

Lemire masterfully introduces this barren landscape to us through Gus’s broken narration. Gus is an innocent child whose view of the world is so narrow that when he finally leaves the park he’s as clueless to what dangers civilisation holds as us readers. What caused this virus? What caused the survivors to give birth to mutant hybrids shortly after the virus struck? And, crucially, why does Gus’s father tell him that he was born before the virus? There’s never the sense that Lemire lacks a grasp on the haunting epic he’s telling. He’s a confident enough storyteller to let the narrative unravel in its own time.

Gus’s narration itself is superb. So many comic book writers attempt to capture the mindframe of an illiterate freak/mutant/animal/robot, and the result seldom rises above embarrassing child-talk. Lemire writes Gus as someone who is not stupid but new to the world; the ruined Nebraska still induces a sense of wonder in the horned boy, and his trust in the sinister Jepperd is so wholesome it almost hurts.

Lemire’s art is also quite unique, depicting a world that is seemingly empty but always treacherous, sterilised yet chaotic. Other than a group of masked marauders Gus and Jepperd briefly encounter there’s little in the way of clichéd imagery that has propped up post-apocalyptic fiction ever since A Boy and His Dog and Mad Max.

So, a great start to what looks to be another classic Vertigo series, then. Jeff Lemire pretty much delivers the perfect introduction to Sweet Tooth’s world. Lemire himself has described this series as “Bambi meets Mad Max”, but ‘Out of the Deep Woods’ shift in tone actually reminded me more of David’s journey in Spielberg’s A.I. than either of those movies. Only without Jude Law and the dumb aliens, hopefully.